Illicit passion, greed, robbery, and murder collide in ‘CRISS CROSS,’ a crime suspense tale from a true master of the genre, Robert Siodmak (‘The Killers’).

Steve Thompson [Burt Lancaster] is a hardworking armoured car driver with a fatal attraction to his ex-wife Anna Dundee [Yvonne DeCarlo], who's now married to notorious hoodlum Slim Dundee [Dan Duryea]. Unable to stay away from her, Steve has a secret tryst with Anna Dundee ... only to be discovered by Slim Dundee. To cover up their affair, Steve Thompson convinces Slim Dundee that he only met with Anna Dundee to get Slim Dundee's help in robbing an upcoming payroll shipment he will be driving. The hood falls for the ruse, which triggers a series of harrowing events that ultimately lead to violence and death.

From a new 4K restoration, The Masters of Cinema Series is proud to present this essential “film noir” in its UK debut on Blu-ray.

FILM FACT: ‘CRISS CROSS’ features the screen debut of Tony Curtis (then known as Anthony Curtis), who briefly appears in a key scene as the Gigolo at the Round-Up Bar nightclub dancing with Yvonne DeCarlo as Anna Dundee to "Jungle Fantasy"  performed by Esy Morales and his Rhumba Band. The production nearly derailed when producer Mark Hellinger died suddenly before filming began. Reportedly, Lancaster was unhappy with the way Robert Siodmak and Daniel Fuchs had reworked Mark Hellinger's idea of a racetrack heist into a fatal romantic triangle. ‘CRISS CROSS’ was shot around downtown Los Angeles, beginning with an aerial panorama that ends at a nightclub just north of downtown. Burt Lancaster's character lives with his mother at a house on Hill Street, just above the north entrance of the short Hill Street Tunnel at Temple Street in the Court Hill section of Bunker Hill. The tunnel and the hill above it (including the house) were raised in 1955 for expansion of the Civic Center and a new Los Angeles County Courthouse on Hill Street, which can often be seen in episodes of the TV Series “Perry Mason.” For the planning of the heist, Robert Siodmak used the exterior and interiors of the rambling, rundown Sunshine Apartments on the steep Third Street steps between Bunker Hill and Olive Street, just opposite the Angels Flight funicular railway in the district of Downtown Los Angeles, California, seen in the background through the windows of the hotel room. This area of Bunker Hill was a favourite of noir directors, and unfortunately it was all torn down in the 1960s. There is also an extended scene inside and outside of the Union Station on Alameda.

Andrew’s Blu-ray Review: After the success of the seminal brilliant film ‘The Killers,’ Burt Lancaster and director Robert Siodmak collaborated yet again to create another “film noir” classic. ‘CRISS CROSS’ [1949] is brimming with all the requisite of a great “film noir” genre scenario, illicit passion, greed, murder, and of course a femme fatale, naturally.

Steve Thompson [Burt Lancaster] is an armoured truck driver with an ex-wife he still loves, Anna Dundee [Yvonne DeCarlo], who later remarried notorious gangster Slim Dundee [Dan Duryea]. The crux of the story has Steve Thompson hatching a plan to help Slim Dundee’s men rob his truck’s  payload, split the money, and use the cash to run away with Anna Dundee … so what could go wrong? Well, this is a “film noir,” which means just about everything…

‘CRISS CROSS’ flashes back to show us the lead-up to what a terrible idea Steve Thompson had. Before that, Steve Thompson’s floated from job to job; trying to get his ex-wife out of his bones, and has now returned to Los Angeles to reunite with his parents and brother. Burt Lancaster plays Steve Thompson as the kind of uncharismatic man for whom you suspect thinking gives him a headache. Steve Thompson’s all large muscles, larger hair, and a very short temper.

Yvonne DeCarlo has the looks to make Anna Dundee a classic femme fatale; a dangerously attractive woman who puts lead in the pencil of both Steve Thompson and Slim Dundee. Sadly, the character’s written with none of the charms of other sleazy femme fatale’s in other “film noire” films, like Joan Bennett and Barbara Stanwyck. Instead, Anna Dundee’s the sort of woman who makes a man’s friends angry and his mother nervous. As for Steve Thompson himself, he never seems to be happy when he’s with Anna Dundee. But what is obvious, is that Anna Dundee is very bad for Steve Thompson, but unlike other femme fatale characters, Ann doesn’t seem worth the risk, which obviously these men in her life do not realise this and are very naïve.

Daniel Fuchs’ screenplay fleshes out Steve Thompson and Anna Dundee’s world with supporting characters who are more memorable than either of them: there’s Pete Ramirez [Stephen  McNally], Steve Thompson’s cop friend who seems resigned to the fact Steve Thompson will cross the line into the turf he patrols; a barfly who’s the butt of everyone’s jokes and thinks she can read people; Steve Thompson’s nervous, caring mother; a wisecracking goon played by the ridiculously overqualified Broadway heavyweight; a bartender who seems singularly ill-equipped to tell people they’ve had enough; and, of course, the lovable old armoured car colleague nicknamed “Pop” [Griff Barnett], who might as well walk around blithely announcing he only has two days left until his retirement.

The opening aerial nigh time shot, hovering over downtown Los Angeles, descending towards the fateful nightclub where so much of the action takes place, instantly sets the tone. And once the heist has gone messily wrong, director Robert Siodmak stages a bravura sequence so fantastically executed that one wishes the story arrived at it sooner and exploited it to its fullest potential. An injured Steve Thompson lies confined to a hospital bed, frantically watching the corridor through the use of the mirror on a dressing table by the door. At the same time he questions a man who claims to be there to visit his wife, but who, despite his harmless appearance, Steve Thompson suspects has come to kill him. So what will become the fate of Steve Thompson?

Complimenting Robert Siodmak’s excellent direction is the equally impressive film music score by Miklós Rózsa and the amazing cinematography of Franz F. Planer, with both men on top form. ‘CRISS CROSS’ is a good film noir and ticks all the genre’s boxes: a man who commits a crime because of his obsessive love (or lust) for a woman… a self-loathing voiceover that both excuses and condemns his actions… a crime gone wrong… sex, death… and the only ending imaginable. However, it might be for this reason why to some critics that ‘CRISS CROSS’ isn’t held up as being one of the all-time “film noir” greats, well I disagree, as I thoroughly enjoyed the film immensely.

Director Robert Siodmak’s taut and stylised direction, combined with the razor sharp dialogue of Daniel Fuchs’s screenplay, slowly and expertly builds the tension right through to the nihilistic dénouement. The seething sensuality between the gorgeous Yvonne DeCarlo and Burt Lancaster sizzles on the screen. Again ‘CRISS CROSS’ to come critics doesn’t quite pack the same punch that the film ‘The Killers’ does, but it surely comes darn close, and if you have an affectation for the “film noir” of this era then this is an indispensable gem.

Blu-ray Image Quality – EUREKA! Entertainment presents us the film ‘CRISS CROSS’ with a wonderful Black-and-White 1080p images that are crisp and clean transfer, capturing the wonderful compositions of and is of course enhanced with a 1.37:1 aspect ratio. The 35mm film frame is awash with very moody deep shadows and expressive lighting techniques that the director. EUREKA! Entertainment 4K restoration of ‘CRISS CROSS’ is simply magnificent. The picture is clear and sharp, and really pops off the screen. This is how a restoration should look, and is proof positive that restorations can look absolutely stunning without resorting to the detested DNR. A great number of scenes in the film are downright stunning with this high-quality encode. Overall the picture quality definitely gets a five star rating from me and well done EUREKA! Entertainment. Please Note: Playback Region B/2: This will not play on most Blu-ray players sold in North America, Central America, South America, Japan, North Korea, South Korea, Taiwan, Hong Kong and Southeast Asia. Learn more about Blu-ray region specifications.

Blu-ray Audio Quality – EUREKA! Entertainment brings us film ‘CRISS CROSS’ in just one standard 2.0 LPCM Stereo Audio experience. The audio is nicely rounded and also gives us a good dynamic range and is also very clear, well-modulated sound with no distortion or age-related surface noise, pops, or crackles. The audio experience also manages to capably render the film's soundtrack and razor-sharp dialogue really good. In the majority of the film's witty and charming dialogue-heavy scenes, the audio clarity sounds quite crisp and satisfactory to one's ears. Overall the audio quality definitely gets a five star rating from me and well done EUREKA! Entertainment.

Special Feature: The Screen Director's Playhouse Audio Adaptation of ‘CRISS CROSS’ [Audio only] [1949] [1080p] [1.78:1] [29:59] Here we get to hear the NBC Screen Director’s Playhouse radio adaption of ‘CRISS CROSS’ and aired on the 10th October, 1949. ‘CRISS CROSS’ is a good gangster story about a planned armoured car holdup and a double-double-cross. While listening to the radio adaption, you get to view lots of colourful lobby cards for the film ‘CRISS CROSS.’ Screen Director Robert Siodmak appears by transcription. Contributors include: Jeff Corey, Burt Lancaster, Betty Morgan, Robert Siodmak (guest screen director) and Jimmy Wallington (announcer).

Finally, over the years, the film ‘CRISS CROSS’ has gained a reputation as a film with a hard bitten cynical outlook and of course a fatal ending. The film contains a leading man who is the classic naïve man, and with one of the most treacherous of femme fatales, a woman to die for, and a creepy underworld scumbag hoodlum, appropriately portrayed by Dan Duryea. Mix in the voice over by Burt Lancaster, the dark low key lighting, brilliant composition and you have the perfect mix for a classic “film noir.” Director Robert Siodmak was a master filmmaker and it’s only right EUREKA! Entertainment includes him in their “Masters of Cinema” series. For all the flaws of ‘CRISS CROSS’ and chiefly among them being that at only 87 minutes, so people feel it is overlong, but I disagree, as it is peppered with outstanding brilliant hold your breath sequences. Highly Recommended! 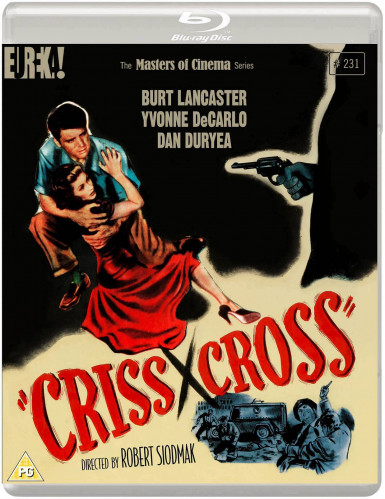 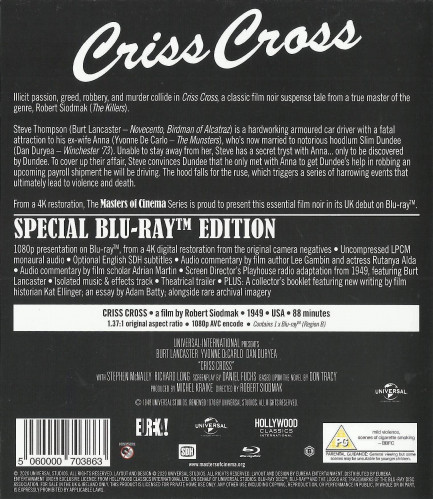