Step up to the plate for ‘DAMN YANKEES,’ the rousing movie of the 1,019 performance Broadway grand slam that imports nearly all the original New York line-up, including Tony Award® winning stars Gwen Verdon as luscious vamp Lola and Ray Walston as her slyly Satanic boss Mr. Applegate. Hollywood’s Tab Hunter suits up as potential lost soul and Washington Senators slugger Joe Hardy, revealing a freewheeling fun side unseen in previous roles. ‘The Pajama Game’ duo of Richard Adler and Jerry Ross serve up an out of the park home run score, including “Whatever Lola Wants” and “Heart.” Choreographer Bob Fosse provides all the right moves, and he joins Gwen Verdon on screen in performing  “Who's Got the Pain?” No pain here, just pure pleasure.

FILM FACT No.2: A notable difference between film and stage versions was Gwen Verdon's performance of the song "A Little Brains". For the film, Gwen Verdon's suggestive hip movements as choreographed by Bob Fosse and performed on stage were considered too risqué for a mainstream American film in 1958, and so, in the film, Gwen Verdon simply pauses at these points. The film was renamed in the United Kingdom to avoid use of the word "Damn" on posters, hoardings and cinema marquees. Uncredited in archive footage are Yogi Berra, Mickey Mantle, Bill Skowron, and other New York Yankees baseball players, plus Art Passarella (umpire).

Andrew’s Blu-ray Review: ‘DAMN YANKEES’ [1958] is a film that is as fun and vibrant as ‘The Pajama Game,’ you are going to want to try to replicate that magic again as soon as possible. Cut to a year later and the world is graced with the second and final collaboration between directors George Abbott and Stanley Donen to bring you ‘DAMN YANKEES.’ The 1958 feature film comes from a screenplay by Abbott adapted from his and Douglass Wallop’s book of the 1955 musical of the same name, itself a clever take on the classic Faustian tale. More than a number of musicals, ‘DAMN YANKEES’ has a much broader appeal simply because it mixes classic musical tropes with America’s pastime, baseball. Musical fans had a reason to cheer, as nearly all of the original stage cast made their way over to the silver screen save for the addition of Tab Hunter in the role of Joe Hardy. Besides the infectious numbers, the standout aspect of this show is Gwen Verdon reprising her role as Lola. Modern audiences may mostly know her name due to Michelle Williams’ portrayal in the FX miniseries Bob Fosse/Gwen Verdon, but they would be remiss if they did not check out the genuine article. Thanks to a stellar new Blu-ray from Warner Archive Collection, they can do so in the best presentation possible.

It can be tough being a sports fan, especially if your loyalties are with a team that cannot ever seem to rise to the occasion. The middle-aged Joe Boyd [Robert Shafer] knows heartbreak as a fan of the Washington Senators baseball team. Joe is not just a fan of baseball; he is positively obsessed to the point that it often causes a minor rift between him and his dear wife, Meg [Shannon Bolin]. The Senators have had quite a rough go of it, and the latest loss has sent Joe over the edge to the point that he proclaims he would sell his soul to the devil to see his team beat those “damn Yankees.” The lesson is always be careful what you wish for as the Devil himself, here known as Mr. Applegate [Ray Walston], appears to offer an even sweeter deal; Joe will not only see his team victorious, but he will have his youth restored so he can lead them to win the pennant. Joe hesitantly accepts, but he does put his skills as a lawyer to good use and convinces a very eager Mr. Applegate to implement an escape clause that would allow Joe a chance to change his mind any time before the last game of the season.

A pleasing Tab Hunter takes over the role of young Joe Hardy, who adopts the moniker of Joe Hardy and really shakes things up when he comes out of nowhere with his new, staggering talent for the game that earns him a place on the team and elevates the talent of all of his teammates. While almost everyone is excited about this mysterious new talent, sports writer Gloria Thorpe cannot shake the feeling that something is off with our dear Joe Hardy. Gloria Thorpe is a bit of a pain for Mr. Applegate, but what vexes him even more is Joe Hardy’s longing to be reunited with Meg after he clinches the pennant. This is simply unacceptable to Mr. Applegate, so he calls in reinforcements to help keep Joe Hardy’s mind off of sentimental notions. The Devil knows better than anyone that lust can take down even the strongest of men, and the seductress Lola [Gwen Verdon] is an expert at getting what she wants. Whatever Lola wants, Lola gets. Will Joe Hardy will hold firm in his resolve to return to his old life with his wife, or will Mr. Applegate win out with one of his tricks to keep Joe Hardy’s soul? The answer may be obvious, but the film is a blast getting to to the final outcome.

Those who are not traditionally fans of musicals will have a clever tale of devilish bargaining and baseball to latch onto, but even they might be hard-pressed to resist the many dazzling numbers throughout the production. Even less obvious crowd pleasers such as the dementedly wistful “Those Were The Good Old Days” and the kinetic “Shoeless Joe From Hannibal, Mo” offer a great deal to enjoy. If we are being honest, though, the numbers with Lola truly make the film. From the initial boasting of “A Little Brains, A Little Talent” to the iconic seductive “Whatever Lola Wants,” Gwen Verdon sets the screen ablaze at every turn. The cinematic gods have to be thanked for convincing the studio not to replace her with a “bigger name” because she is truly terrific in this role. As is this entire cast made up almost entirely of the original Broadway performers. These gifted individuals know these characters inside and out, which is an invaluable thing when attempting to construct a propulsive musical. ‘DAMN YANKEES’ does a truly amazing job of translating the energy of the stage to the big screen. Even those who claim to be allergic to musicals are likely to find quite a bit to love here.

SIX MONTHS OUT OF EVERY YEAR (Music by Richard Adler) (Lyrics by Jerry Ross) [Performed by Shannon Bolin, Robert Shafer and chorus]

WHATEVER LOLA WANTS, LOLA GETS (Music by Richard Adler) [Performed by the Warner Brothers Studio Orchestra]

Blu-ray Image Quality – Warner Archive Collection presents us the film ‘DAMN YANKEES’ has given us a stunning 1080p image and is enhanced with a superb 1.85:1 anamorphic aspect ratio that has taken a lot of pride and passion when it comes to their releases. ‘DAMN YANKEES’ has undergone a new 4K restoration that was sourced from some of the preserved reels. The result is, as one would expect, stunning. The bold and bright colours of these late 1950’s films simply leap off the screen. Detail has been improved and has breathed new life into the film’s look and feel. For a film of this age, it looks this good on disc the only thing we can say is that Warner Archive Collection has knocked this one out of the park. The film ‘DAMN YANKEES’ is practically pristine with no noticeable instances of damage or dirt detected here. The black levels are incredibly deep with perfect stability throughout. The level of stark detail and clarity is stunning with a lovely amount of natural film grain intact. The film features some luscious Technicolor’s within the costumes and settings, including Lola’s scintillating boudoir, but at times I felt the colours were very warm and not as sharp with films made in Technicolor, but now and again the colours pop off the screen with a great vibrancy. Compression artefacts, banding and other such issues do not serve as an issue in this transfer. This presentation earns Warner Archive Collection gets top marks!

Blu-ray Audio Quality – Warner Archive Collection brings us the film ‘DAMN YANKEES’ where get somewhat of an odd audio mix in that it mimic’s the DVD’s Dolby Digital 2.0 mono mix, though this one has gotten the upgraded 2.0 DTS Master Audio that pulls out all of the stops treatment. Dialogue comes through perfectly clear from beginning to end without ever being overshadowed by competing elements. Every element seems to present with a nice fidelity, as all sounds are clearly defined and in balance. Music pulses throughout nearly every moment of this feature, and this track handles it beautifully with nothing ever sounding crunchy or unstable. These tunes have never sounded better than on this disc. This is a track that mercifully does not exhibit any signs of age-related wear-and-tear. Warner Archive Collection has allowed this film to sound the best it ever has on vie your home entertainment.

Finally, ‘DAMN YANKEES’ is a clever and bouncy musical that has much to offer fans of musicals and non-fans alike. The decision to keep the majority of the Broadway cast is one that pays off. One of the big standouts is Gwen Verdon as the temptress Lola who wants Joe Hardy and gets a liking to Joe Hardy along the way that can’t fall under the puppet strings of Mr. Applegate. Get a close look and you’ll notice chorographer Bob Fosse in a small cameo appearance during one of the dance numbers at Joe Hardy’s celebration. ‘DAMN YANKEES’ is a fun film that is a feel good musical about overcoming obstacles no matter which direction they may come into your life and when the smoke clears and those damn Yankees are still too tough to beat, you’ve gotta have lots and lots of heart. Warner Archive Collection has released a new Blu-ray with an unbelievable A/V presentation, but sadly not too much in the way of special features. Regardless, this is a delight from start to finish that will make a great addition to any Blu-ray collection. Highly Recommended! 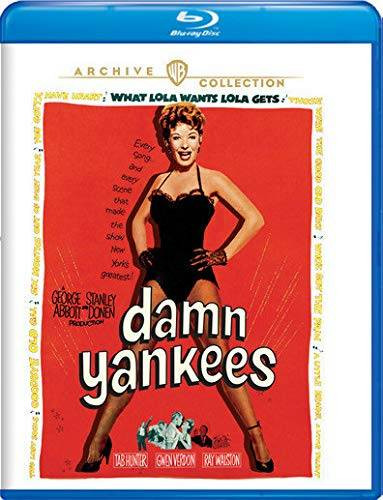 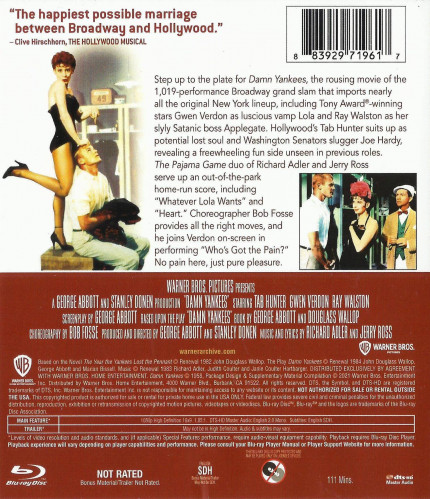