John Carpenter's pulp science fiction classic – this brilliantly clever and funny parody of Stanley Kubrick's ‘2001: A Space Odyssey,’ follows a warped intergalactic mission to blow up unstable planets. Four bored astronauts fill in time between missions catching up on their tans with the help of a sun-lamp, playing with a suspiciously plastic-looking alien mascot they are taking back to Earth and conversing with their female version of Hal. Things start to go horribly wrong when the spaceship computer misfires and a “smart bomb” think’s it is God.

This all new Blu-ray edition has been sourced from an original 35mm theatrical print. The film was shot originally as 16mm, and then blown up to 35mm for theatrical distribution. This new master has been subject to a new grade and extensive manual frame by frame digital restoration. This we believe is the finest presentation ever of this science fiction classic...

FILM FACT No.2: Many special effects were done by Dan O'Bannon, ship design was by Ron Cobb, model work by Dan O'Bannon and Greg Jein, and animation was done by Bob Greenberg. Ron Cobb drew the original design for the Dark Star ship on a napkin while eating at the International House of Pancakes. The ‘DARK STAR’ feature film debut for both John Carpenter and San O'Bannon, was also produced and scored by John Carpenter, while Dan O'Bannon also acted as editor, production designer, and visual effects supervisor and appeared as Sergeant Pinback.

Andrew’s Blu-ray Review: ‘DARK STAR’ [1974] Before ‘Halloween’ and ‘The Thing,’ John Carpenter flexed his genre muscles with spaced-out space-travel comedy ‘DARK STAR.’ It was the hippie, deadbeat answer to the films like Star Trek and 2001, but in turn influenced everything from the films like ‘ALIEN’ to ‘Sunshine.’

Space travel has rarely been as mundane, riotous or charmingly unspectacular as it is in John Carpenter’s debut film ‘DARK STAR’ which began in 1970 as a USC film school project with Dan O’Bannon starring, co-writing, editing and doing almost everything else, it was picked up by producer Jack H. Harris in 1973, which funded additional footage for a theatrical release the following year.

Somewhere in the future, the scout ship Dark Star is 20 years into its mission to track down and destroy “unstable planets” to pave the way for human expansion into the universe. But things aren’t going very well.

As cabin fever takes hold aboard the cramped, deteriorating ship, the crew is starting to fall apart. Talby [Dre Pahich] spends his time isolated from the rest of the crew in an observation dome communing with the universe; Lieutenant Doolittle [Brian Narelle] has reluctantly taken control of the mission and pines for his days as a California surfer; Boiler [Cal Kuniholm] relieves the boredom with laser gun target practice; and Sergeant Pinback [Dan O'Bannon] – who isn’t who he appears to be – annoys the rest of the crew with his practical jokes and is rapidly coming apart at the seams.

There’s a belligerent alien in the hold, an artificially intelligent weapon with delusions of grandeur in the bomb bay, and a dead captain [Joe Saunders] who is deep frozen but still able to communicate with his crew – much good his confused ramblings do them. The ship Dark Star is falling apart and accidents have destroyed both the sleeping quarters and the crew’s entire supply of toilet paper.

The best-loved sequence in the film is Pinback’s increasingly uproarious battle of wills with the alien he’s insisted on bringing aboard as a mascot. It’s an absurd image but one that is undeniably very funny, where the creature tries to kill Pinback by tickling him as he hangs precariously from a narrow ledge in a lift shaft. It also gave ‘DARK STAR’ one of its most enduring “stars,” and the other being the philosophically inclined “Thermostellar Device” Bomb 20 whose religious awakening provides the film with its memorable climax.

In the four decades since the feature-length version was released, and ‘DARK STAR’ was influence has been evident in places both obvious in the film ‘ALIEN’ [1979] for which Dan O’Bannon reworked the idea of a belligerent extra-terrestrial stalking the cramped corridors of a grubby spaceship, and less so with BBC TV’s “Red Dwarf” and Douglas Adams’ “The Hitchhikers Guide to the Galaxy” both owe ‘DARK STAR’ a huge debt.

Given its technical and financial limitations, it’s nothing short of remarkable and a great testament to John Carpenter’s already considerable talents that ‘DARK STAR’ not only looked as professional as it does but that it has more than stood the test of time. It remains just as funny, affecting and ridiculous now than when the film was released in 1974.

Blu-ray Image Quality – Fabulous Films presents us the film ‘DARK STAR’ that looks quite good, and is certainly a big improvement over the 16mm print that I viewed a very long time ago and especially with the various home video versions that have been released in the past and this Blu-ray release has lovingly been subjected to an extensive manual frame-by-frame digital restoration. But sadly the image is not that sharp due to the 16mm image being enlarged and it is a slightly soft grainy and is also slightly a big disappointment, and as far as I am concerned it really only gets a three star rating from me. Please Note: Playback Region B/2: This will not play on most Blu-ray players sold in North America, Central America, South America, Japan, North Korea, South Korea, Taiwan, Hong Kong and Southeast Asia. Learn more about Blu-ray region specifications.

Blu-ray Audio Quality – Fabulous Films brings us the film ‘DARK STAR’ with a very standard 5.1 Dolby Digital Audio experience, and has been cleaned up somewhat, but there are some occasional pops, hiss, and surface noise during quiet sections. Dialogue is very clear and understandable, and is not drowned out by music or sound effects.

Special Feature: Galleries: Here you get to view four individual items and they are as follows: Original Poster [3 images]; Original Lobby Cards [8 images]; Colour Images [9 images] and Black & White Images [10 images]. When viewing the images in the four separate items, you have to press the ENTER button on your remote control to advance the images.

Special Feature: Let There Be Light: The Odyssey of ‘DARK STAR’ [2010] [480i / 1080i] [1.78:1] [116:39] This all new feature-length documentary explores the controversial making of the John Carpenter and Dan O'Bannon student first feature film. From its humble beginnings of the USC student film project, to its modern day status as a cult classic masterpiece. It also offers a rare glimpse inside the creative minds of the two USC film students... that would eventually go on to change the way Science Fiction and Horror films would be made. This Making of ‘DARK STAR’ documentary, hears John Carpenter and ‘DARK STAR’ fans tells such a complete and all-encompassing story of the creation of this film and the people involved with it. John Carpenter and Dan O'Bannon inform us of their towering achievement in the world of Science Fiction and Horror film. You get to view the very beginnings and just how they pulled off ‘DARK STAR’ with hardly any money and as a student film is and should be, for any film lover a complete joy to behold. The story of Dark Star's creation makes me love Dark Star even more. I suggest this to any true lover of film and John Carpenter, this unique Documentary is a must view. Sadly, when you hear the voice of John Carpenter it is not a very good audio presentation and is very muffled and luckily you have the yellow subtitles to see what he is saying. Contributors include: John Carpenter (Director) (voice), Tommy Lee Wallace (Associate Art Director), Diane O'Bannon (Wife of Dan O'Bannon), Brian Narelle (Lt. Doolittle), Jeff Burr (USC Undergrad 1979 – 1982) (Writer/Director), Douglas Knapp (Cinematographer), Bill Taylor (Optical Effects), Dan O'Bannon (Co-Writer/Co-Star/Editor), Ron Cobb (‘DARK STAR’ Designer/Consultant), Cookie Knapp (Computer Voice) and Jack H. Harris (Executive Producer). The documentary is dedicated to Dan O'Bannon (1946 – 2009).

Finally, ‘DARK STAR’ was a film project at the University of Southern California for just $60,000, this sly tongue in cheek space parody begins as a satire, however, it quickly moves into original territory as the cabin-fevered crew cope with an alien stowaway, a nagging computer, its late commander's cryogenically preserved brain and a thermo-nuclear device that's all set to explode. The Sci-Fi film is very witty, profound and the bonus of a clever film music score by its producer/director John Carpenter. This cult favourite film is a snappy and funny satire, even on its tiny budget it still manages to dig a bit deeper. It covers themes such as isolation that John Carpenter later examined in the film ‘The Thing,’ and has the same type of very functional, unflashy setting and functional, unflashy crew. Despite the obviously 1970s settings and the clunky sets, and although it looks old it doesn’t feel old. Let’s face it, we’ve had to sit through so many ponderous sci-fi films over the past few years, some with huge budgets, that this witty, short take on how people cope with isolation and abandonment actually feels very fresh. Recommended! 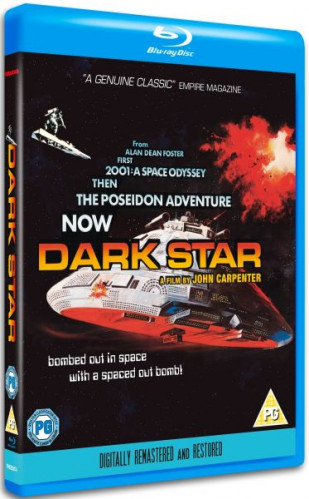 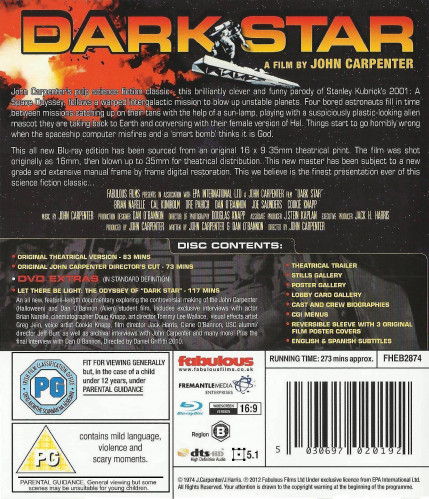