A brilliantly inventive whodunit offering a fascinating glimpse into the early days of radio and television. ‘DEATH AT BROADCASTING HOUSE’ features early film roles for Ian Hunter, Jack Hawkins and Donald Wolfit. With scenes filmed at the BBC's then newly constructed London headquarters, this classic murder mystery is presented here as a brand-new High Definition remaster from original film elements in its original theatrical aspect ratio.

When an actor is murdered during the recording of a radio play, Detective Inspector Gregory quickly discovers that the victim had many enemies amongst his fellow players. When his deductions lead him nowhere he decides to reconstruct the crime with the full help of Broadcasting House, hoping that this tried and tested strategy will lead him to the killer.

FILM FACT: The original plot for ‘DEATH AT BROADCASTING HOUSE’ comes from a novel of the same name, and is set in what was then the mysterious world of radio in what was then the BBC's new broadcasting centre, Broadcasting House. It was written in 1934 by Val Gielgud who was the brother of John Gielgud and at that time the BBC's Head of Productions and "Holt Marvell" who was actually Eric Maschwitz, a lyricist and writer for films and the BBC. During the investigation, the detective uses a recording of the radio programme during which the murder occurred, and he refers to the "Blattnerphone" one of the first sound-recording machines and one of which had actually been installed at Broadcasting House in March 1932.

Andrew’s Blu-ray Review: With the film ‘DEATH AT BROADCASTING HOUSE’ [1934] is a murder-mystery British film filled with evocative shots of BBC Broadcasting House in London (in fact the interiors were recreated elsewhere) and cameo appearances by a number of broadcasting celebrities of the day as themselves are Hannen Swaffer, Vernon Bartlett, Eric Dunstan, Gillie Potter, singers Elisabeth Welch and Eve Becke, and musicians Ord Hamilton, the Gershom Parkington Quintette and Percival Mackey and his Band. The opening shot, heralding the credits, shows the mast atop Broadcasting House which is totally iconic image around the world.

Capitalising on the popularity of radio as the mass-medium du jour, 1934's ‘DEATH AT BROADCASTING HOUSE’ is a highly effective murder mystery based on the novel by radio and television drama pioneer Val Gielgud and fellow broadcaster Eric Maschwitz (under the pen name Holt Marvell). When an actor is strangled to death on air whilst performing live to 35 million listeners, everyone at Broadcasting House comes under the scrutiny of the dedicated Detective Inspector Gregory of everyone except the Director General that is?

‘DEATH AT BROADCASTING HOUSE’ is a very entertaining film about the on air murder of a radio actor. Val Gielgud appears as a radio producer. The British film is based on Val Gielgud’s novel and also co-wrote the screenplay. Peter Haddon as Guy Bannister is a lot of fun to watch as a man wandering around the building looking for the studio where a variety show is being broadcast. It’s also a good chance to see the early Jack Hawkins.

Nobody likes Sydney Parsons [Donald Wolfit] and is in a studio by himself during the rehearsal of a murder mystery. Producer Julian Caird [Val Gielgud] doesn’t like the way Sydney Parsons portrays a man being strangled that he tries to coach him.

That night the play is being broadcast live. Walking into the building is Guy Bannister [Peter Haddon] and he has arranged for a pass from radio executive Herbert Evans [Jack Hawkins]. During the play lead actor Leopold Dryden [Austin Trevor] walks out to get some air before his cue and time for Sydney Parsons’ strangling scene and he is very impressive in the role that is because he really is strangled.

Featuring early film roles for Ian Hunter, Jack Hawkins and Donald Wolfit, this whodunit offers both a brilliantly inventive storyline and a fascinating behind-the-scenes glimpse into the early days of broadcasting. Released in 1934, with scenes filmed at the BBC’s then newly constructed London headquarters and encompassing performances by Broadway star Elisabeth Welch and British singer/actress Eve Becke. It’s a good one to watch especially if you like the older classic British films.

‘DEATH AT BROADCASTING HOUSE’ is somewhat to some people a “dated” murder mystery from 1934 but will appeal to connoisseurs of thus nostalgia genre, and to those with a keen interest in the world of vintage BBC radio broadcasting. The remainder of the film is the usual “who done it” scenario, with the difference that here, unlikely excitement derives from learning about old-fashioned recording equipment and techniques. The broadcasting house is meant to be the BBC broadcasting house, though of course all the interior scenes were filmed inside a film studio. Still, it does look impressively authentic.

At 71 minutes, ‘DEATH AT BROADCASTING HOUSE’ has the right length to keep us guessing right to the very end and keep us from getting bored, considering the lack of action. This is a fun British film with special interest for anyone who has a passion for early radio and especially relating to the BBC. Well worth picking up, especially to find out who the real murdered is and you will be shocked who did the dastardly deed and has a very dramatic ending.

BONUS: Once again, Network has done us proud in showing us the original BRITISH BOARD OF FILM CENSORS “A” Certificate before the film ‘DEATH AT BROADCASTING HOUSE’ starts.

Blu-ray Image Quality – A Phoenix Films Production, Network and STUDIOCANAL presents us ‘DEATH AT BROADCASTING HOUSE’ with a stunning 1080p black-and-white image and enhanced with a 1.37:1 aspect ratio. The print isn’t flawless by any stretch but is far better than we deserve to expect from such a 1934 film of this serious vintage. Network seems to be using the best prints possible and investing in good image transfers in their current run of old British film. On the inside of the Blu-ray cover, they inform us that ‘DEATH AT BROADCASTING HOUSE’ has been newly transferred in High Definition from a 35mm positive print in its original theatrical ration of 1.37:1. Although additional image restoration was carried out, the picture images still display some minor faults including dirt, scratches, density fluctuations, movement and missing frames, amongst other issues. Please Note: Playback Region B/2: This will not play on most Blu-ray players sold in North America, Central America, South America, Japan, North Korea, South Korea, Taiwan, Hong Kong and Southeast Asia. Learn more about Blu-ray region specifications.

Blu-ray Audio Quality – A Phoenix Films Production, Network and STUDIOCANAL brings us just one standard 2.0 LPCM Stereo Audio experience and especially it says it is in Mono. Network has done a sterling work in upgrading the audio track, as you can hear every word the actors speak, especially in the BBC standard posh pronouncing of the words. So all in all, Network has done a really excellent job in upgrading of the 1934 British film audio, especially with the archival recording of the sound track that was available.

Finally, ‘DEATH AT BROADCASTING HOUSE’ is set in what back then was considered the intriguing and ground-breaking world of BBC radio, the plot revolves round the live broadcast of a play. It’s interesting to note that various scenes not only were recorded in different studios, but that a certain amount of glamour was most welcome during broadcasting. This not only manifested itself through the fact that the artists involved had to wear fine suits for the men and cocktail dresses for the women which was a mantra stipulation from the head of the BBC at the time and that was John Charles Walsham Reith, 1st Baron Reith, KT, GCVO, GBE, CB, TD, PC, who was a Scottish broadcasting executive who established the tradition of independent public service broadcasting in the United Kingdom, whereas the listeners up and down the country would only hear their voices, but various musical interludes were also provided for. In the film, this is demonstrated via cameo appearances by radio stars of the day, like Broadway import Elisabeth Welch, singer Eva Becke, and composer/bandleader Percival Mackey. To top it, fully-fledged tap dancers and chorus girls were brought in. I say! Highly Recommended! 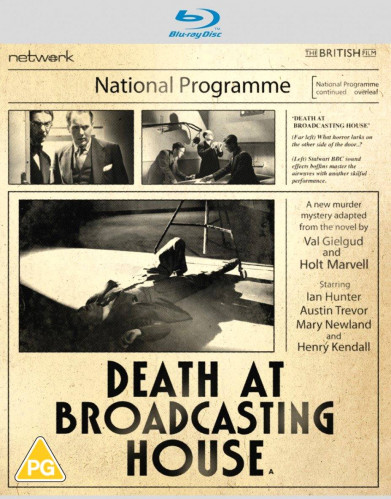 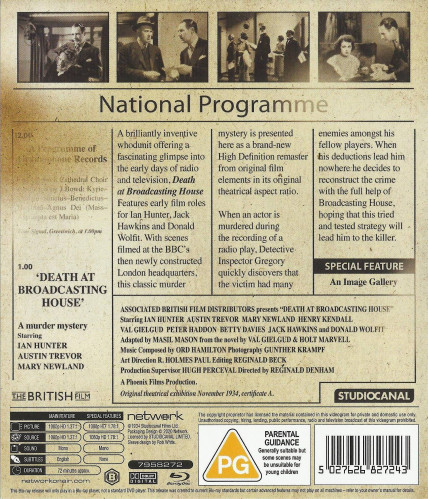