After covering a golf tournament in Los Angeles, sportswriter Mike Hagen [Gregory Peck] returns to his New York home with a tan. And with a fashion-designer wife Marilla Brown Hagen [Lauren Bacall] he scarcely knows.

FILM FACT No.2: The original concept for the film reportedly came from Helen Rose, who designed dozens of gowns and dresses for Bacall for ‘DESIGNING WOMAN.’ Lauren Bacall was dealing with husband Humphrey Bogart's eventually-fatal illness during the shooting. Humphrey Bogart died 14th January, 1957, four months before the film's release. Both James Stewart and Cary Grant turned down the role that went to Gregory Peck.

Andrew’s Blu-ray Review: ‘DESIGNING WOMAN’ is a 1957 American romantic comedy film about two young, whirlwind-romanced newlywed professionals and their misadventures in adjusting to each other's lifestyles. Vincente Minnelli directed this sophisticated comedy, and is like the best Spencer Tracy/Katherine Hepburn film that Spencer Tracy/Katherine Hepburn never made. But with this comedy film, the majority of the film is a flashback, with the beginning and the end featuring five different characters breaking the fourth wall as they talk directly to the camera.

Throughout the film ‘DESIGNING WOMAN,’ each of these five characters in the film have alternating narration, which is surprisingly refreshing and well-done. It includes the audience in the story, as it feels like each of the characters are talking to you and you're all just hanging out, listening to a funny anecdote. It creates a warm atmosphere and makes the experience of watching it that much more fun.

In California covering a golf tournament, New York sports reporter Mike Hagen [Gregory Peck] correctly chooses the winning golfer in the reporters' betting pool. With the $1200 he won, Mike Hagen begins buying drinks. The next morning he awakes with no memory of the night before. Hung over and believing that he failed to file his story, Mike Hagen sits beside the hotel pool drinking coffee. When an unfamiliar woman, Marilla Brown Hagen [Lauren Bacall], approaches him, Mike Hagen, through a series of misunderstandings, assumes she is a disreputable lady of the night.

As Marilla Brown Hagen heatedly begins to correct him, he receives a call from his editor telling him he had received Mike Hagen's story, but that a corrupt boxing promoter was threatening Mike Hagen. Ending the call, Mike Hagen returns to Marilla Brown Hagen who explains that she had helped him write his story. This begins a whirlwind eight day romance which ends with marriage. Only on the flight back to New York does Mike Hagen begin to discover that Marilla Brown Hagen had hidden the details of her job, wealth and family connections in order to land Mike Hagen and of course this quickly causes friction.

Mike Hagen is a sportswriter and poker enthusiast with working-class friends. Marilla Brown Hagen designs clothes for a wide array of artistic personalities. Their friends clash memorably one Wednesday night when his Poker Club and her Drama Society both convene at Marilla Brown Hagen's apartment.

Marilla Brown Hagen becomes suspicious of Mike Hagen after she finds a photograph of Lori Shannon [Dolores Gray], Mike Hagen's former girlfriend. Mike Hagen tries to hide his former relationship, but fails miserably. Complicating matters even further is Mike Hagen's continuing series of exposés of the activities of crooked boxing promoter Martin Daylor [Edward Platt]. Mike Hagen's life is in danger, but he hides that from his wife as well. What results is a series of hilarious misunderstandings and mighty mishaps.

‘DESIGNING WOMAN’ is a relatively tame, compared to what we view with modern films of today. There is never any real doubt about Mike Hagen's fidelity to Marilla Brown Hagen or even the misunderstanding for the momentarily feuding couple. ‘DESIGNING WOMAN’ can be very charming at times throughout the film, but other times can feel like a three ring circus. Preston Ames’s luscious mid-fifties sets, capped off by uber-chichi trappings, like the Modigliani hanging over Marilla Brown Hagen’s faux marble fireplace; a Park Avenue spread fit for a queen . . . or at least, a socially affluent mannequin who fancies herself with slinky black jerseys and stylish straight skirts optional. Everything about ‘DESIGNING WOMAN’ is sort of perfection and definitely in the eye of the beholder and that is for you to decide.

THERE’LL BE SOME CHANGES MADE (uncredited) (Music by W. Benton Overstreet) (Lyrics by Billy Higgins)

Blu-ray Image Quality – Warner Archive Collection brings you this Blu-ray disc with a simply gorgeous-looking 1080p re-master print, and will sure to impress, especially with the equally impressive 2.35:1 aspect ratio. A lot of Metro-Goldwyn-Mayer’s mid-fifties ‘CinemaScope’ product has suffered from improper storage, colour fading and other anomalies exacerbated by the natural aging process. But ‘DESIGNING WOMEN’ appears to have somehow, miraculously, escaped all of that; its steadfast hues, showing off Robert Alton’s sumptuous cinematography to its very best advantage. Ostensibly, this is one of the finest-looking CinemaScope films yet to arrive in hi-definition and truly, one for the top shelve for any die-hard collector of the works of Gregory Peck, Lauren Bacall and Minnelli. Contrast is superb and film grain has been properly maintained. The image is silky smooth and very consistent throughout the film, with transitional dissolves and fades, which usually was a problem with ‘CinemaScope’ films effortlessly on display herein.

Blu-ray Audio Quality – Warner Archive Collection presents us with an original 2.0 DTS-HD Master Audio magnetic master mix, which is the staple diet of a typical for M-G-M's non-musical audio presentation productions from the late Fifties era. The master for this film has been well-preserved, and has had minor clean-up, primarily to eliminate background hiss. The audio sound renders the film's energetic dialogue very clear and intelligibly, and it also delivers a delightful André Previn's light-hearted music film score and especially with the lyrics for the song in the film by Betty Comden, Adolph Green and Roger Edens. So all in all, the dynamic sound range is very appropriate for an audio recording from the 1950s era.

Special Feature: Costume Designer Helen Rose Interview [1957] [1080i] [1.33:1] [5:12] Here we get to view a sort of Behind-the-Scenes Featurette to promote ‘DESIGNING WOMAN’ and its theatrical release, where the Metro-Goldwyn-Mayer studio created this very short film showcasing its much-lauded costume designer Helen Rose. The short piece was created to allow local TV news reporters to “ask” her prepared questions which Helen Rose would answer on film. You will not short gaps left for the questions. Unfortunately, no record of those Helen Rose’s answers are not illuminated very well what the screen costume design was all about at the Metro-Goldwyn-Mayer studio in 1957. It was all filmed in black-and-white.

Theatrical Trailer [1957] [1080i] [2.35:1] [3:31] This is the Original Theatrical Trailer for the film ‘DESIGNING WOMAN.’ Despite the quality is not as good as the actual film print, but it definitely is a good trailer in presenting the style of the film, but what headline wording that is shown to the audience at the end of the trailer, when they say, “HOLLYWOOD’S BEST COMEDY IN YEARS,” well I’ll leave you to decide and judge if they are right or wrong for yourself.

Finally, ‘DESIGNING WOMAN’ is not exactly a bona fide classic, despite Metro-Goldwyn-Mayer’s top-tier treatment.  Gregory Peck, Lauren Bacall and Dolores Gray give their all in this romantic comedy film and Vincente Minnelli really tries to bring this project together. Everyone from Mike Hagen’s buddies to the man of the house looks as though they have just stepped out of a GQ magazine spread. The gangster thugs are as polished as the up-towners, too slick for their own good and not to be believed. The film ‘DESIGNING WOMAN’ affords Vincente Minnelli the opportunity to supplement the picture’s lack of razor sharp wit and one-liner barbs; the gauche and the glamorous, all sharing equal screen time in a perfect counterbalance, as only Vincente Minnelli’s keen eye for visual finesse is rightly achieved and it cleverly brings together the worlds of haute couture, sports (particularly boxing), show business, and the underworld. The release of the 1957 film shows off the designer’s world of this period in time depicted in ‘DESIGNING WOMAN,’ moderately believable for many in the audience to glimpse into the lives of a select few living the high-life in Manhattan’s moneyed playgrounds at the time, and the film is meant to provide undiluted escapism for the masses, but of course that is for you to decide. Renowned comedian George Burns, on the other hands, applauded Gregory Peck's talents, commenting that his deadpan reaction to being covered in hot pasta had him "in stitches." Gregory Peck said gleefully, "Well, to me it was worth as much as the Academy Award®, to have George Burns informs me that I could make him laugh." Highly Recommended! 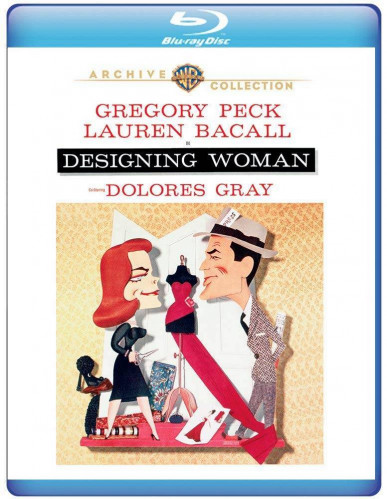 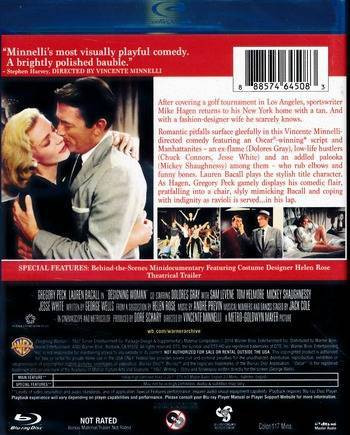