Recorded live at the Paris Olympia to a sell-out audience. The captivating voice of Diana Krall delivers a sensual collection of romantic ballads and bossa novas.

This concert performance features tracks from her CD Album “The Look of Love” and the full set from her sensational world tour. The Grammy award winner takes us through a variety of well-known standards, all performed in the totally individual, yet classic style that is Diana Krall.

‘DIANA KRALL: LIVE IN PARIS’ was filmed at the Olympia in Paris in late 2001, was Diana Krall's first concert film and was  released originally on a Japanese DVD in 2001. Which I had originally. The concert features tracks from her first four albums including many that have remained firm concert favourites to this day. It was an instant hit and went on to be certified gold, platinum and multi-platinum in many countries around the world. Now for the first time the original standard definition footage is being reissued on Blu-ray disc to benefit from the best available picture and sound quality.

This is a large, lush polished Blu-ray production with the “Orchestre Symphonique Europeen & Paris Jazz Big Band” and not one, but two conductors. Diana Krall also has her own jazz accompaniment for the smaller numbers. Some of her hard-core fans are not going to like this “big band” style, although some of the more intimate numbers try hard to imitate a jazz setting to varying degrees of success.

Diana Krall, like many jazz musicians, is in the latter category as one must interpret `jazz standards' and in doing so, one makes Nat King Cole's or Frank Sinatra's or Burt Bacharach's songs their own, and Diana Krall has done a disc full of Nat King Cole songs. Some people like the live performance to be identical to the released album; this is the ultimate “what you see is what you get.”

Let me say that the arrangements and orchestrations here are completely different to any of her past performances, with the tempo, emphasis, nuances and phrasing all largely changed. Songs that are strongly lyrical are now perhaps more instrumental. I would say Diana spends more time playing on some tracks than singing, so much so that there are instrument solos here that are `missing' (as it were) on the original track. Slow songs are now jumped up several notches in speed and some songs sound much more relaxed than the Compact Disc tracks.

It is this variation that jazz lovers revel in. I might say, “the track is as good as on the actual Compact Disc, but you should hear the version on this stunning Blu-ray.” I guess this will be stated a lot when this Blu-ray gets into mass circulation, because some of the tracks have already become my firm favourite “versions.”

The seventeen tracks are a brilliant varied selection from several of her past CD Albums, especially the Diana Krall awesome special DTS and SACD surround compact discs I have in my CD Collection, although the emphasis is more on the recent ones. As always, there are one or two tracks that I wish were there but that's the nature of these almost `best of' performances. I wonder if there isn't more footage somewhere?

I Love Being Here With You.

The Look of Love.

Maybe You'll Be There.

Cry Me A River.

East Of the Sun.

I Don't Know Enough About You.

A Case of You.

Blu-ray Image Quality – This is a very high quality anamorphic 1.78:1 feature with a superb and stunning 1080p image. The overall look is very fine; the colours are rich, the browns of the wood instruments and strings, the sheeny black of the piano finish versus the flatter black of the tuxedos and Diana Kralls's leather jacket. The darkness levels are strong, with excellent shadow and solid detailed blacks. It has my favourite feature which is translucent smoke. Skin tones are excellent, with the older male performers looking suitably lined - it is sharp enough to pick out individual hairs. There are close ups of Diana and the piano keyboard. The production looks to have used high quality Digital Video or video cams as there are trademarks like some stair casing and aliasing on guitar necks, piano keys and bows. There is also isolated bloom/bleed especially with some of the coloured highlights. There is a stylistic device that I'm certain will get up the nose of many people. Because it is “Paris” the producers have decided to intercut various scenes of the Paris streetscape into the concert. They are drab, grainy clips of the Arc de Triomphe, the Tripartite, the Parisians boulevards and tree-lined avenues. I am expecting the Eiffel Tower to pop up soon! Because of the look, I suppose you could call it “Paris in Autumn.” One part I do really like and that is the rehearsal footage that's also interleaved into the concert. Shooting style is consistent and intelligent with no jarring angles or cuts, whilst the lighting is low but intimate. Crowd shots are limited with the band and orchestra as the focus.

Blu-ray Audio Quality – Sonically there are two audio tracks, which are 5.1 DTS-HD Master Audio and 2.0 Dolby Digital Stereo Audio. The stereo track is largely just under Compact Disc quality. Firstly, rear speaker use is limited to very faint audience and ambience. For me it's pretty much a front channel performance; I would be a bit offended if there was a strong rear channel element in a jazz type setting. The audience participation is limited but it's welcome when it happens. About that soundstage, it is diminished with the stereo track; perhaps those “subtle” rears are missed here in setting ambience. Avoid the stereo track, instead definitely go for the 5.1 DTS-HD Master Audio, as that will make you feel you are actually there at the concert and sitting in the audience, because the DTS track provides a totally smooth, relaxing detailed audio performance.

Blu-ray Special Features and Extras: There are two music videos added on that have nothing to do with the main performance. They both have that “MTV sheen” of a high dollar, well produced music video. Both are Dolby stereo and listenable as they are “close to CD” quality and both are identical to the CD Album tracks, i.e. they are standard studio releases.

Special Feature: Music Videos: “The Look of Love” is for some unknown reason in the 1.37:1 aspect ratio and “Let's Face the Music and Dance” is a 2.35:1 anamorphic and of a similar quality. You can see the long hours the producers spent creating the appropriate 1080p image. Both are standard track in length. I did not mind the Dolby Stereo audio track as they are the actual CD Album tracks.

Special Feature: Exclusive Rehearsal Footage [1080p] [1.78:1] However, the best extra is a good one. Included is a just under 16 minute rehearsal and this is something that more music discs should have. It is of identical quality to the main production, that is, it is anamorphic and it has a 5.1 DTS track. It is much more casual, impromptu even, with performers in plain clothes and the performance is just as good if not better. Three songs are featured, “Do It Again,” “The Look of Love” and “Love Letters.” You can contrast the differences between these tracks and the ones in the main feature and these differences are there, even if they are slight. It is not chaptered, alas, however at least the menus and intro clip are stylishly understated.

Finally, I don't see how any lover of jazz and bossa nova cannot wind up buying this. Technically it's totally excellent and I what to expect from a full bitrate DTS track and you can swap the Dolby Stereo track for a purist 2.0 LPCM Stereo track if you prefer, but that's neither here nor there. The performances are uniformly fresh and excellent, with the `old' songs sounding so new and exciting in their execution. Personally I do not mind that `bigness' of the performances, whereas some people do not like the use of a jazz band and orchestra, but it is one interpretation and a good one. The video quality is excellent and the sound is close to perfect. There are lots of songs included within the 130 minutes and the rehearsal footage is a great bonus. I haven't had this disc for very long, but I love it already and an absolute pleasure to review. ‘DIANA KRALL: LIVE IN PARIS’ captures Diana Krall doing what she does best, captivating the viewer with an amazing show, and that stunning voice, this is a must for any of her fans. Very Highly Recommended! 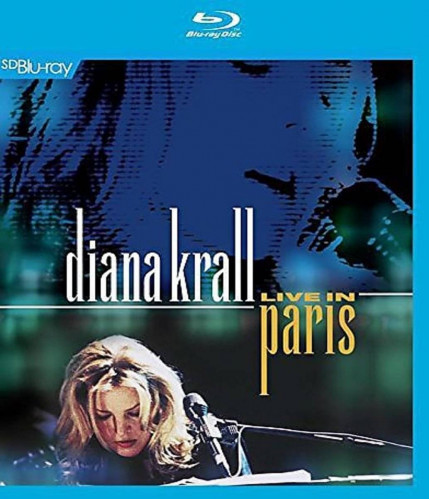 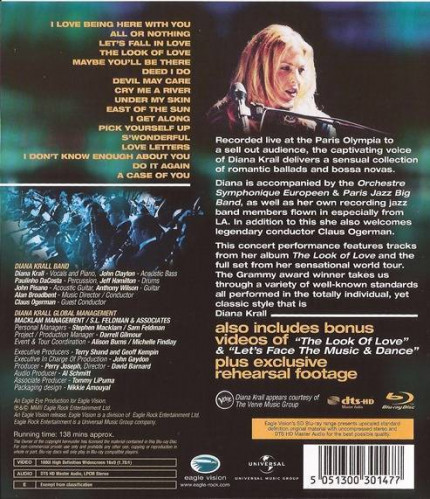