Diana Krall has had a long time fascination with bossa nova, a type of music which perfectly suits her sophisticated yet sensual style. This culminated in her new studio album "Quiet Nights" and released by Verve in spring 2009. In this stunning concert filmed in the home of the bossa nova, Rio de Janeiro, in November 2008. Accompanied by her band and an orchestra, Diana Krall delivers a superb set of standards in true bossa nova style but clearly bearing her unique stamp. This programme captures Diana Krall at her scintillating best.

Andrew's Blu-ray Review: I am a massive fan of Diana Krall and I've got all of her Compact Disc Albums, especially the DTS and SACD Surround Sound format Compact Discs, and I always enjoy her mellow arrangements and smoky voice when one of her songs is performed. But with this Blu-ray disc concert of ‘DIANA KRALL: LIVE IN RIO’ is just totally enchanting and a roller-coaster ride. Filmed in November 2008 and featuring much of the same talent and music assembled for her bossa nova-flavoured "Quiet Nights" CD Album, “Live in Rio” has the same warm, mellow feeling that you can only expect from this brilliant Canadian artist.

This long and lovely concert video, recorded live at Vivo Rio in Rio de Janeiro and has completely changed my impression of Diana Krall, especially again being one of my favourite female jazz vocalist and I must admit I felt she was trading primarily on her great beauty and the sexiness of her song delivery, but not anymore, as Diana Krall has proved that her talents are boundless. In one of the bonus features her producer Tommy LiPuma says he feels she has matured in many ways and is now better than ever. After all, her marriage to Elvis Costello has resulted in two children and she's slightly less svelt-looking than in previous videos. I had forgotten that Diana Krall got her start in jazz as a strictly instrumental pianist, trying to emulate Monte Alexander. Her piano solos in this concert are certainly well beyond what one would hear from most such celebrity vocalists. And guitarist Anthony Wilson's and bassist John Clayton's solos are equally exciting.

The selection of the 18 songs is extremely varied, and they're not all of the type that seems designed for her patented sexy sophisticated delivery. A couple show her connections to her hero, who also began as a strictly jazz pianist and later was talked into doing vocals, Nat "King" Cole. Her version of his Frim Fram Sauce is a kick. The first and major part of the programme is selections from the Great American Songbook and other classics. Then Diana Krall swings into four bossa nova numbers, which receive a most welcoming reaction from the Brazilian audience. They sing along in Portuguese with her English lyrics on three of them, but on Este Seu Olhar they wig out because she sings that tune in Portuguese. Would have been nice to have a translation, and Diana Krall explains after that she finds it easier to sing in that language than to speak it. It did seem a bit odd that after the great audience connection with the four bossa nova tunes the performers came back with three American classics - although her version of “S'Wonderful” is probably the most heartfelt I have ever heard of this Gershwin classic.

The orchestral arrangements are by the famed Claus Ogerman, and the excellent orchestral backing is heard on something like alternate tunes, with Krall's quintet soloing on the others. On some of the tunes Krall restricts her piano contributions to her right hand only, while delivering her vocals with legs crossed and her upper foot keeping time. Even when playing with both hands, her left hand doesn't seem up to the improvisational chops of her right. The actual shots of the performers are interspersed with travelogue-type shots of Rio and environs. Many of these are collected together in the promotional film in the extras to “The Boy From Ipanema.” The interviews are interesting, and in the Rooftop Session we have several tunes quietly and informally sung by Diana Krall at a rooftop restaurant with a view of Sugar Loaf in the background. Her drummer Jeff Hamilton plays with his brushes on a large serving plate on his knees. One sees in the shots of the audience several mike stands placed among them, and these obviously come into use for the audience reactions and joining along on some of the tunes, which has a strong emotional appeal. They provide a more immersive surround effect than one gets with most such video concerts. Altogether this is an amazing terrific musical experience that should have the widest appeal to anyone who appreciates the talent of Dina Krall.

Blu-ray Image Quality – The good news is that the concert is so entrancing. The 1.78:1 aspect ratio image arrives via the 1080p stunning image, specifically, those outdoor exterior shots of the city and beaches of Rio. Once they get inside, though, watch out. Tight close-ups look good and dig the detail in the close up of Diana Krall's foot on the piano peddle. The videographers were apparently unable to figure out how to properly shoot a high-definition image in the low light of the concert hall. As a result, medium shots are mildly noisy and wide shots are worse; the black levels are shockingly uneven, plagued by minor flickering and heavier-than-average grain and the sparsely-lit audience shots are downright fuzzy, looking worse than an up converted standard-definition inferior DVD. All in all the Blu-ray image quality overall is a very good presentation, and it certainly will not be a disappointment.

Blu-ray Audio Quality – On the other hand, I don't have a single complaint about the audio presentation. Viewers get three options: English: 5.1 DTS-HD Master Audio, English: 5.1 Dolby Digital Surround Sound and English: 2.0 LPCM Stereo Audio and of course I went with preferred first option, and was rewarded with one of the cleanest, crispest concert audio recordings ever. Diana Krall's centre channel vocals are rich and clear, and instrumentation is evenly spread and dynamic. The wonderfully robust upright bass fills out the channels nicely, and the use of the rear surrounds for applause and audience reaction completes this beautifully immersive aural experience.

Special Feature: Rooftop Sessions [2008] [1080p] [1.78:1] [13:57] An informal, four-song unplugged set and they do "The Boy From Ipanema," "Too Marvellous For Words," "Cheek To Cheek," and "Quiet Night," apparently performed, at first unnoticed, at a rooftop restaurant/bar with a view of Sugar Loaf in the background. Her drummer Jeff Hamilton plays with his brushes on a large serving plate on his knees. One sees in the shots of the audience several mike stands placed among them, and these obviously come into use for the audience reactions and joining along on some of the tunes, which has a strong emotional appeal. The image quality here is very much improved and it's a daylight/dusk exterior, and there's an enjoyably low-key, off-the-cuff quality to these performances.

Special Feature: Quiet Conversations [2008] [1080p] [1.78:1] [19:21] Documentary focuses on both the concert and the "Quiet Nights" Compact Disc album, with Diana Krall and her fellow musicians discussing the intersection of jazz standards,  as well as the formation of this particular combination of musicians. So all in all, this is a very nice intimate view of Diana Krall and here interaction with a her fellow musicians.

Special Feature: Promotional Film: The Boy from Ipanema [2008] [1080p] [1.78:1] [4:58] This mostly comprises of all of the video images combined, which you got to see now and again at the start of the video and also while the concert was in progress. Strangely, we only get a few glimpses of Diana Krall.

Finally, this Blu-ray disc is so gorgeous to look at and a total bonus of being really beautiful to listen to. ‘DIANA KRALL: LIVE IN RIO’ Blu-ray disc will provide with over 135 minutes of rapturous aural bliss. There is a reason why this Canadian artist remains a giant artist; because of it's inherent in hearing every note of this incredible concert. This is also great late night listening; even with the remarkable picture quality, and it's impossible to argue against the skill of the musicians in this performance and the quality of the audio mix, even if Diana Krall's vocals are an acquired taste to some people, but not me, because Diana Krall can do no wrong in my opinion. But most importantly, Jazz fans should definitely add this to their Blu-ray Collection without any hesitation. Highly Recommended! 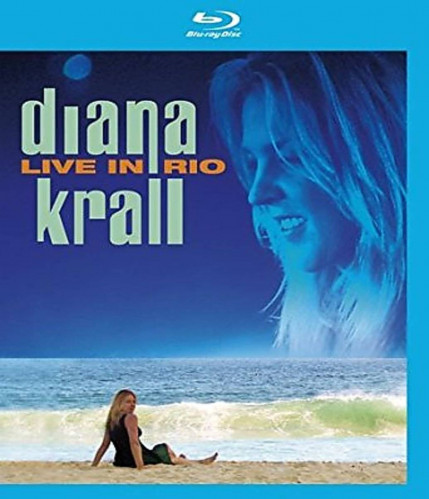 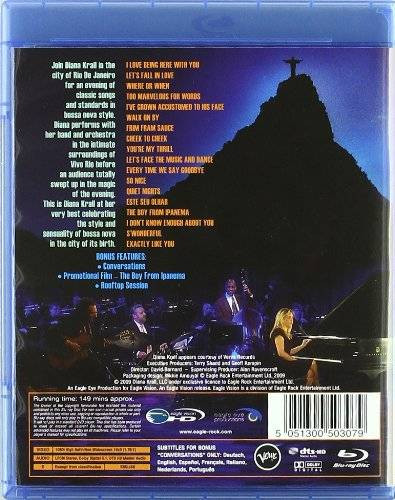