Based on the first of Kenneth Robeson's 181 adventure-packed Doc Savage books. ‘DOC SAVAGE: THE MAN OF BRONZE’ hits the screen with all its gee-whiz, gung-ho spirit intact. And its bold protagonist, who along with having a herculean body is also a surgeon, linguist and inventor, remains determined to do right to all and wrong to no one.

Ron Ely [TV's ‘Tarzan’] plays the strapping Doc Savage in this high-camp, big-heroics tale of his trek into the Valley of the Vanished to confront the power-hungry Captain Seas [Paul Wexler]. And behind the camera are pros who know how to get the most out of this entertainment bronze mine: veteran fantasy film producer George Pal of ‘The War of the Worlds’ and ‘The Time Machine’ and director Michael Anderson of ‘Around the World in 80 Days’ and ‘Logan's Run.’ Narrated by Paul Frees.

FILM FACT No.2: The film ‘DOC SAVAGE: THE MAN OF BRONZE’ is also remembered for its theme song arranged by Frank De Vol, based on John Philip Sousa's “The Thunderer.” John Philip Sousa’s music was intended to evoke a patriotic theme for ‘DOC SAVAGE: THE MAN OF BRONZE’ and the Lyrics were by Don Black. Other aspects of the Doc Savage mythos were modified for the film. For example, The film takes place in 1936, but the original pulp novel was published in March 1933. Most Doc Savage chronologies place the events in “The Man of Bronze” in early 1931 prior to the official opening of the Empire State Building, the implicit location of Doc Savage's 86th floor penthouse headquarters. Producer George Pal secured the film and television rights from Norma Dent with the intention of launching a film series, followed by an eventual television series. Pal originally contacted Steve Reeves for the role of Doc Savage but when filming was about to begin a Hollywood writers’ strike put the film on hold, and Steve Reeves and the original director were replaced. Michael Anderson would eventually direct the film.

Andrew’s Blu-ray Review: Historically-speaking, the science fiction and fantasy cinema has battled high camp and a form of art notable because of its exaggerated or over-the-top attributes and for over five decades. With ‘DOC SAVAGE: THE MAN OF BRONZE’ [1975], here we have a very tongue-in-cheek film adaptation of the pulp magazine hero or superhero and created by Henry W. Ralston and story editor John L. Nanovi in the 1930s.

‘DOC SAVAGE: THE MAN OF BRONZE’ was originally only available on an inferior DVD release, but now the Warner Archive Collection has finally released it through their archive programme and what a joy it is, as I have loved this film ever since I saw it at the cinema and subsequently on the television. Before sitting down to watch it I did a little homework, and the film was produced the legendary and brilliant George Pal, who did the brilliant classic films like ‘The Time Machine’ and ‘War of the Worlds,’ which I wish Warner Archive Collection would release this on a Blu-ray disc. That alone is a recommend viewing; however it has also help with having at the helm the director Michael Anderson, who had previously directed another big-budget adventure film ‘Around the World in 80 Days.’

The Doc Savage character is indeed a sort of Indiana Jones, adventurer/explorer type of character. However he also shares a good deal in common with Batman. Doc Savage has trained to the limits of human perfection and is a brilliant scientist/inventor (as the cheesy camp theme music lets you know on several occasions). This superhero quality also extends beyond his physical and mental capabilities. Doc Savage has a loyal bunch of sidekicks, each with their own special abilities, as well as a “fortress of solitude” in the far north, and a penthouse that includes a variety of vehicles, including a helicopter that launches out of a giant eagle’s head. Better still his official logo appears on all of his vehicles, clothing, and accessories. The logo looks just like the lettering in the poster, and you almost expect to see a little trademark insignia on his various pieces of property.

The film opens with an attempt on Doc Savage’s life, as a Native American marksman takes a shot with a sniper rifle. No problem though because the windows in Doc Savage’s penthouse are all designed to refract the interior such that everything appears 3-inches off from where they actually are. Doc Savage and his gang give chase only to find that the whole thing was a distraction. While they were out a secret  map was sent to Doc Savage from his murdered father gave details of a hidden jungle oasis with a lake of gold. Undeterred Doc Savage and company head to the far reaches of Hidalgo, where they encounter the villainous Captain Seas, who has teamed up with some locals of Mayan ancestry in order to gain access to the gold. Doc Savage sets out to defeat Seas who, with the help of the Mayans, has harnessed the power of “The Green Death” to do his bidding, who some negative critics thought the animated green snakes were very “cheesy animated snakes,” well they are wrong, as I thought the animated effects were well executed and very effective and again these pompous critics of this film can’t see the irony of this film, where it is just a tongue cheek fun filled film, and just like on par with the TV series “BATMAN.”

First off let’s talk about that cast. Ron Ely (TV’s Tarzan) cuts a dashing figure as Doc Savage. On a visual level he is just about as perfect as one could hope, but sometimes can be slightly wooden in the acting department, but honestly his performance worked for me and just the right combination of overconfidence and machismo. Doc Savage’s band of sidekicks were also well-played, with the most recognizable being Paul Gleason as Long Tom. Each has their own distinct personality and skill set which are highlighted on various occasions. Paul Wexler plays like a Christopher Lee substitute, but he is just about adequate as the villain, with a touch of camp. Making more of an impression is Pamela Hensley in her screen debut as Doc Savage’s leading lady. Everyone seems to be having a great time. Yes, the film is a really enjoyable romp to watch, especially with Doc Savage being a decent superhero in this film.

The opening action sequence really sets the tone for the film, as the matte painting of Doc Savage’s penthouse is nothing short of superb. I am a huge fan of matte paintings in classic films of this genre. Sure they are sort of fake looking, but they can be absolutely beautiful and this is a film that screams a high level of artistry. Unfortunately, when we see “The Green Death” attacks, it does not quite come off as they would of hoped. I understand animation was necessary given the limitations of the time the film was made, but the animation here is not quite good enough even for the period. They should have brought in Disney talent for something like this. Every time we’re treated to “The Green Death” sequence, what should be terrifying, does not quite come off. Finally the sets look like a few steps above an Ed Wood production, with the most disappointing being the lake of gold.

With my comments about the film ‘DOC SAVAGE: THE MAN OF BRONZE’ that I found many shortcomings, but despite this I still think it is a classic film genre of its time. Any disappointment stems from the fact that the character could be adapted in a way that would lead to a greater superhero film, and it’s a shame that this initial outing derailed that possibility. Apparently a reboot was planned in the late 1990's starring Arnold Schwarzenegger and to be directed by Frank Darabont of ‘The Shawshank Redemption’ and ‘The Walking Dead,’ but once Arnold Schwarzenegger entered politics those plans were shelved.

One final bit worthy of mentioning is that a franchise was in the works for Doc Savage. At the end of the film we are informed that Doc Savage will return in ‘Doc Savage: The Arch Enemy of Evil.’ Interestingly details via the internet suggest that a fair amount of the sequel was filmed simultaneously with ‘DOC SAVAGE: THE MAN OF BRONZE.’ Because the first outing bombed so very badly and the critics really slammed the film in a very negative way, the follow up film was never completed or released. Boy that footage would have made a great extra on this Blu-ray release, assuming it still exists in a vault somewhere? Oh well never mind, we still have this film to fall back on whenever we want a bit of escapism!

Blu-ray Image Quality – Warner Archive Collection has once again brought us another old classic action pack film in this 1080p encoded image and offset with a great 1.85:1 aspect ratio presentation and is presented to us with a commissioned new scan of an interpositive, which was performed by Warner's Motion Picture Imaging facility, followed by extensive colour correction and clean-up, but has a slight analogue softness to it, which characteristic of many Seventies films released over that decade, and the optical image is remarkably detailed with good clarity with this Blu-ray disc. With close-ups you have good excellent definition, especially revealing the minutia of the individual strands of Doc Savage's unnaturally golden locks. The film's night-time sequences feature solid blacks, and its palette ranges from the pale, cool tones of a snowy mountain crossing to the rich, saturated hues of the jungle sequences. Any noise interference and other artefacts are wholly absent, and the film's grain pattern is finely resolved. So all in all this is a very good presentation for a film that was released in 1975.

Blu-ray Audio Quality – Warner Archive Collection has sadly not upgraded the audio presentation and given us only a 2.0 DTS-HD Master Audio, so despite this, the track has impressive dynamic range for its era, best exemplified in the deep bass drumbeats of the rousing John Philip Sousa standards adapted by Frank De Vol to create the composed film's score. The dialogue is very clearly rendered, as are the essential sound effects, which are usually more goofy than realistic, as in the mixed martial arts showdown between Doc Savage and Captain Seas. Again despite only one audio presentation and its limitation, it is still a good audio exciting presentation.

Theatrical Trailer [1975] [1080i] [1.78:1] [3:01] This is the Original Theatrical Trailer for the film ‘DOC SAVAGE: THE MAN OF BRONZE.’ It is a little bit rough round the edges, and has a slight analogue softness to it, but despite this it is still a great over the top trailer presentation.

Finally, ‘DOC SAVAGE: THE MAN OF BRONZE’ [1975], was panned by critics and failed at the box-office. George Pal suggested the film’s failure was to do with the loss of funding, when the studio changed heads and George Pal was forced to cut costs. One of the major issues for me was George Pal seemed to go for more “camp” style to the film maybe to capture the “Batman” style. That could be considered a good thing or a bad thing depending on your feelings of Adam West as Batman. But nevertheless it is a piece of cinema history and a shame more money was not allowed to be spent on the film and they were not allowed to do a follow up film. Despite all the negative reaction to this film, I have loved it ever since I first saw the film in the cinema and longed for it to be released on the superior Blu-ray format and now I have it in my possession and it has now gone pride of place in my Blu-ray Collection. Highly Recommended! 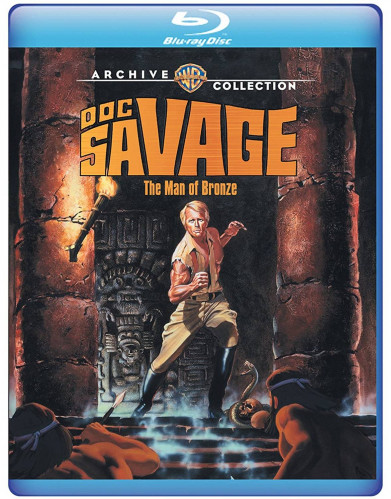 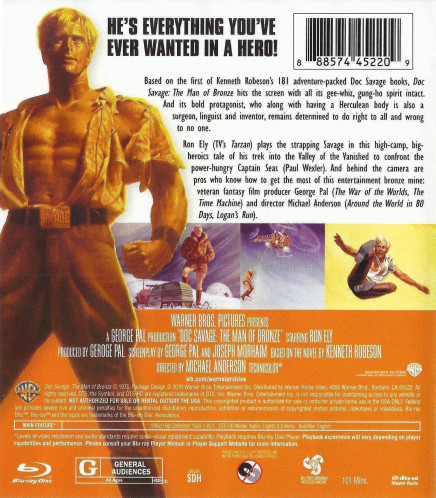