The future America is an irradiated waste land. Mega City One a vast, violent metropolis of over 400 million citizens living in perpetual fear, The only ones attempting to impose order are The Judges; Law enforcers, juries, judges and executioners rolled into one.

The epitome of these is Dreed. Dredd and rookie Judge, the powerful psychic Cassandra Anderson, head out to a routine homicide in the notorious “Peachtrees” Mega-block a 200 story vertical slum run by the pitiless “Ma-Ma” gang. Our two judges are caught in a vicious and relentless fight for survival when “Ma-Ma” shuts down the building and orders her clan to hunt them down.

Andrew’s Blu-ray Review: Judge Dredd [Karl Urban] and his rookie in training Judge Anderson [Olivia Thirlby] are called out to the “Peachtree” Mega-block after three people are murdered. Soon after their arrival and the arrest of a local thug, the crime boss of the Mega-block, Madeline Madrigal, also known as “Ma-Ma” [Lena Headey] locks down the entire 200 floor block and says she’s not opening up again until the two judges are killed. Times are dire for the two law enforcers but one of those Judges is Judge Dredd and he’s not so easy to take out.

In 2012 ‘DREDD’ proved to be somewhat of an antidote to the comic book hero films that just keep on getting bigger and bigger. A simple premise, a limited cast, a gritty and violent approach that services the lead character's origins rather than hollows him out for mass consumption. Of course, there’s nothing all that original here. This really is the same plot that most video games serve up every couple of months. Enclosed space! Weapons options! Increasingly more difficult foes as you work up the levels. It’s all typical stuff but when you throw Judge Dredd into the mix, played by a perfectly grimacing Karl Urban this elevates into something way more fun than the basics would usually deliver.

Elevation is genuinely the key here. As the characters get higher up the Mega-block everything seems to grow more and more extreme. Gunfire, blood sprays, gore, Ma Ma’s madness and just extreme amounts of destruction. Everything builds and builds but still there’s time for quiet moments between waves to fill out the world of Mega City One. Sure, it’s not exactly much in the way of set up and backstory for newbies to Judge Dredd but there’s enough to paint a bigger simple picture of his world and just how hard edged it is to warrant people like Judge Dredd to enforce the law.

Director Pete Travis has kept everything streamlined. We know the odds very early on. We know what’s at stake. We know Dredd has to look out for Anderson as she grows a backbone and we know “Ma-Ma” is real bad and enough to throw all she can at the judges in order to come out of this one the victor. The real success here however is that Travis uses all of this to sell exactly how tough and driven Dredd is at every turn. Every set piece celebrates the 2000AD character like we've never seen on the big screen and it all works. Travis even pulls off the impossible and never has a single frame of Dredd out of his helmet. Karl Urban never really get much more to do that scowl but he does it well and Dredd comes out of this film a total and vindicated hero I’d like to see again in more sequels.

Blu-ray Image Quality – Entertainment in Video presents us with an awesome 1080p image and is of course enhanced with a 2.40:1 aspect ratio that really shows of the film in an amazing way. To begin with, when the scenes are well lit, the colours and the textures are really quite great. Kinks and scratches on Dredd’s helmet look fantastic as does the stubble on his chin and many a set pops with neon lighting and other well placed light sources. The “Slo-Mo” scenes pop with amazing vivid colour and really play with images beautifully for an 1080p presentation but… and this is a big old but, every now and again this Blu-ray can look not visually tip top. It begins with a real sense of heightened grain or indeed digital noise. It’s sometimes quite filmic and fitting for the style of the movie but at other times it’s like a veil has been placed over the screen. This mutes colours, dirties light sources and turns every deep black into a grubby dark green or blue. When this drop in quality occurs at its worst, it’s luckily only for a very short time before we pop back into a much better looking portion of a scene but between the low lighting, boosted with neon oranges, blues and reds there is a distinct murky feel to a lot of the corridors of this Mega-block. Please Note: Playback Region B/2: This will not play on most Blu-ray players sold in North America, Central America, South America, Japan, North Korea, South Korea, Taiwan, Hong Kong and Southeast Asia. Learn more about Blu-ray region specifications.

Blu-ray Audio Quality – Entertainment in Video brings us a good solid 5.1 DTS-Master Audio track experience. The bass on this Blu-ray is relentless as well as awesome and I have to say it’s all in a great way. It almost becomes a supporting role as it lends so much to the film. Everything from the score to simply Dredd walking has a bass boost that will kick the hell out of you and it seems to be used throughout the film, even when you least expect it. The bass underpinning score gives the film a constant presence and when it’s not setting a mood, Dredd’s bike is rumbling in wonderful ways, guns are tearing up the Mega-block or there are scenes filled out with the heavy end of dance music or crowd ambience, just to keep everything feeling like a heartbeat to the rawness of the film. Because of the entire bass and general boost to most things dialogue can sometimes feel a little bit low in quieter conversations but it’s certainly not a consistent thing as non-whispered dialogue is generally strong and clear.

Special Feature: Slo-Mo [2012] [1080p] [1.78:1] [2:12] This special feature shows the ideas behind the drug induced visuals and the super “slo-mo” effect generated in the film. Slo-Mo was manufactured in the Peachtree Block of Sector 13 by the Ma-Ma Clan. Slo-Mo is a caramel-coloured liquid that comes in a white inhaler with a clear capsule. The white inhaler has a heart on it to mark the Ma-Ma Clan.

Special Feature: The 3rd Dimension [2012] [1080p] [1.78:1] [2:00] This special feature tackles the approach to the hyper stylised 3D images in the film as well as the approach to added depth and the process. We also get a look at the slow-motion cameras used for the “Slo-Mo” sequences and get to see a lot of the camera tests they ran to get the blood to look the way they wanted.

Special Feature: Interviews [2012] [1080p] [1.78:1] [26:35] The biggest chunk on the extras are the ‘Interviews’ which are with all involved in the project. It’s a shame they are cobbled together with static question cards and bland talking head answers.

Finally, ‘DREDD’ 3D maybe wasn’t quite as hard hitting this second time around as it was the first time I saw it, but even with that said, there’s a whole lot to enjoy here. Karl Urban does Judge Dredd some real justice, the story is simple and to the point and extremely violent compared to the other comic book films out there and really this ninety odd minute fight to get to the boss shoot fest is exactly what the doctor ordered to kick the Judge Dredd franchise off to a good start. I really do hope sequels are enabled after this first outing and it would be good to see the world of ‘DREDD’ expanded to all the places the comics go. The disc itself is great for the most part but a little chaotic in the visuals department and thin on real extras. That said, the punchy audio set-up should keep most happy as it captures the large cinematic oomph very well indeed. This is a great companion to the Sylvester Stallone ‘Judge Dredd’ Blu-ray disc and I am so happy to add ‘DREDD’ 3D to my ever expanding 3D Blu-ray Disc Collection. Highly Recommended! 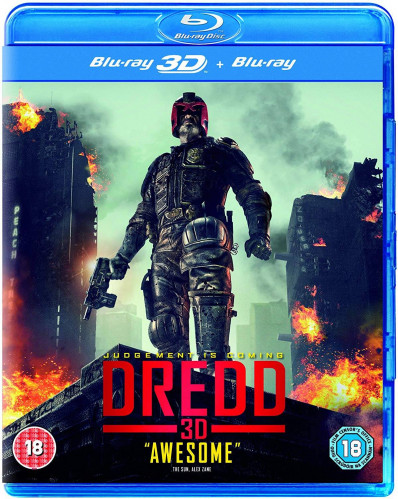 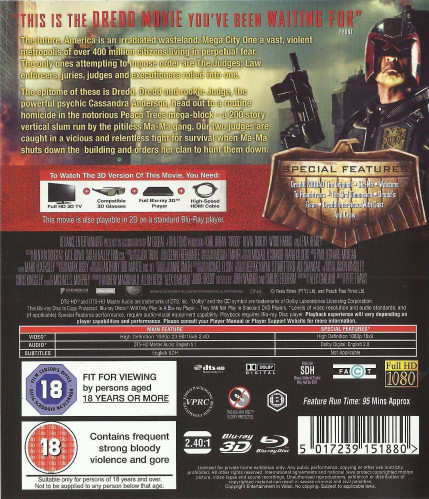