‘EDDIE THE EAGLE’ follows the realisation of the childhood dream of Michael “Eddie” Edwards [Taron Egerton], and his unflinching determination to become Great Britain’s first Olympic ski-jumper. Reluctantly aided by former ski-jumper Bronson Peary [Hugh Jackman] as his coach, Eddie is unwavering in his quest to reach the 1988 Calgary Winter Games. ‘EDDIE THE EAGLE’ is an uplifting, inspirational story that celebrates human spirit, passion, and one man’s refusal to accept defeat.

FILM FACT No.2: Principal photography took place in Oberstdorf and Garmisch-Partenkirchen in Bavaria, in Seefeld in Tirol, at the Pinewood Studios and in London from 9th March to 3rd May, 2015. Dry slope scenes were filmed at a dry ski slope in Bracknell, Berkshire, United Kingdom.

Andrew’s Blu-ray Review: ‘EDDIE THE EAGLE’ [2016] was released just in time to savour 2016 Olympic and Paralympic fever, is based on the true story of Michael “Eddie” Edwards, a physically disabled child that grew up with Olympic dreams. Michael “Eddie” Edwards ignores his father’s pleas to join his plastering trade to become the first British competitor in Ski Jumping since 1929. Even if you don’t know the details people recognise the name and it is no spoiler to reveal he doesn’t win the gold medal.

The film details the exploits of Michael “Eddie” Edwards, better known as “Eddie the Eagle,” the most famous ski jumper in British history. Edwards won the hearts of sports fans around the world by making a catastrophic showing at the 1988 Winter Olympics in Calgary in the USA. The film’s portrayal of Michael “Eddie” Edwards never-say-die approach to the sport “celebrates the human spirit and resilience in the face of extraordinary odds and challenges.”

Anyone who remembers the exploits of Michael “Eddie” Edwards during the 1988 Winter Olympics will no doubt look back on the events with much fondness. It was an inspiring tale and one that captured the hearts of a nation. A biopic of his life isn’t the most obvious choice for a feel-good comedy but kudos to writers Sean Macaulay and Simon Kelton for creating such an engaging story. This is all wrapped up nicely by director Dexter Fletcher, who creates a champion underdog film that will resonate with practically everyone.

Young Eddie Edwards [Taron Egerton] dreams of competing at the Olympics but a natural skill set eludes him in most sports. When inspiration takes hold, Michael “Eddie” Edwards decides that his fate lies with the Winter Olympics and goes about training for the 1988 event. Facing constant bureaucracy and deemed a joke by his own governing body, Michael “Eddie” Edwards is refused entry to compete. But this doesn’t stop him and he perseveres on his own as an independent athlete. This soon connects him with Bronson Peary [Hugh Jackman], a former ski jumper who has shunned the sport. Together they take on the astronomical odds set up against him, so Eddie can realise his dream and capture the attention of the watching world.

Taking quite a bit of artistic licence with the onscreen story, the character of Bronson Peary is made up. Being an amalgamation of various sources of inspiration and help to Michael “Eddie” Edwards over the years, the filmmakers have decided to combine all of these influences into the cantankerous character of Bronson Peary, played exceptionally well by Hugh Jackman. The real success of the film lies with the chemistry between these two oddballs from different sides of the spectrum. Hugh Jackman and Taron Egerton are an absolute joy to watch together, as well as their friendship and student/teacher dynamic enthusiasm creates the central heart of this wonderful heart-warming film.

Taron Egerton’s physical transformation into Michael “Eddie” Edwards is totally remarkable, in that he nails the appearance of the 1980s bespectacled hero with no use of prosthetics. It’s a challenge that Taron Egerton passes with flying colours, delivering one hell of a performance that perfectly captures the real spark of magic that Michael “Eddie” Edwards had. Elsewhere, there are strong cameos for Keith Allen as Michael “Eddie” Edwards’s sceptical Dad and Christopher Walken as Jackman’s old school teacher. The film makes  a winking reference to the Jamaican bobsled team whose efforts in the same Olympic Games were the subject of the 1993 hit film ‘Cool Runnings,’ which even get a reference at one point in the film.

LIONSGATE UK Home Entertainment ‘EDDIE THE EAGLE’ is the feel-good inspirational film the world needs now more than ever and the enthusiasm for the film ‘EDDIE THE EAGLE’ is an easy film to highly recommend. The slightly over-the-top nature of the story and acting, while not a deal-breaker, allows the film to be accessed by all ages. It’s this generation’s ‘Cool Runnings,’ and a story that can only serve to inspire audiences, while promoting good sportsmanship, humility, and dogged determination to achieve one’s goals. So what’s not to like?

The “Olympic Creed” states “The most important thing in the Games is not to win but to take part, just as the most important thing in life is not the triumph, but the struggle.” While for the most part that’s balls, as we all know winning is the only thing that truly matters, those words most certainly apply to Michael “Eddie” Edwards, whose effort, endeavour and resolve served as inspiration to millions. And this film does justice to that story, telling one of the great underdog tales with humour and warmth, the result being a likeable family film that much like Michael “Eddie” Edwards own exploits is guaranteed to put a big smile on your face. Also if you want a film with a lot of heart, determination and especially an emotional story of a person who would not give up and achieved his goal in life and to also show you that if you have a dream, it will happen like Michael “Eddie” Edwards did what he set out to do and did it so brilliantly.

OUT OF THE SKY (Written by Gary Barlow, Ben Mark and Mark Owen) [Performed by Marc Almond]

Blu-ray Image Quality – LIONSGATE UK Home Entertainment brings you this Blu-ray disc in a stunning 1080p image presentation and in doing so gives us this Blu-ray proper justice to presenting a film worthy of a gold medal in terms of the visual representation and is enhanced with a stunning 2.39:1 aspect ratio. As the film takes place in very snowy settings, and gets to see a lot of bright scenes, which helped me to enjoy my favourite aspect of enjoying this Blu-ray disc. The image is detailed in both the indoor settings and the outdoor scenes, where you get a great look at much of what went into production of the film. Aspects of the production make for scenes that provide a solid level of depth within this comedy. There are a number of darker scenes in this film, which lead to seeing solid black levels on the whole. It is all in the snow jumping costumes that allow you to have plenty to enjoy when it comes to seeing how colour pops in this film and look great and vibrant throughout, wherever it seems to appear. Facial textures look great throughout this film, as the details of these people are always clean and clear, fitting of the marvellous Blu-ray disc. Please Note: Playback Region B/2: This will not play on most Blu-ray players sold in North America, Central America, South America, Japan, North Korea, South Korea, Taiwan, Hong Kong and Southeast Asia. Learn more about Blu-ray region specifications.

Blu-ray Audio Quality – LIONSGATE UK Home Entertainment provides us with a brilliant 7.1 DTS-HD Master Audio experience, there is plenty to enjoy in the sound ambience of ‘EDDIE THE EAGLE’ film. It comes down to a lot of dialogue and sound effects to make you hear the snow being slice through, but all in all sounds really great, as well as a brilliant composed film score by Matthew Margeson that gives the felling of the 1980s, as the bonus pf hearing the fun soundtrack hits of the 1980s as well. Some of the source audio material and the sports action sequences provide a bit of lift, as far as all of the channels is concerned. This is a well-structured audio track, with the lossless presentation doing a fine job to really show off the effectiveness of this mix overall. There is plenty of fun dialogue throughout, which comes through loud and clear. So all in all, well done LIONSGATE UK Home Entertainment for giving us something to really enjoy.

Special Feature: Let the Games Begin: Soaring with Eddie the Eagle [2016] [1080p] [2.39:1/1.78:1] [46:40] This special feature is made up of three segments, that relates to the film. These items are the usual insight into the film and consists of material with cast and crew interviews, but there is actually quite a bit of great material in these segments about the rare behind-the-scenes of the making of the film, rare behind-the-scene shooting of the ski jumps, bringing the 1988 Calgary Winter Olympic games to life. We also get to see some rare screen tests with Taron Egerton and Hugh Jackman. They also go into great detail about the need to create some relatable fictional characters to make the story work as a film being near on in trying to achieve being accurate about real life in the 1980s and it works beautifully. We also get to view lots of beautiful drawn concept art images. So what you get to view is the following: ALL OR NOTHING: THE HERO’S HEART; AN UNLIKELYFRIENDSHIP: EDDIE AND PEARY and ATTITUDE IS ALTITUDE: FILMING THE SKI JUMP and as usual you can either watch them separately or Play All. Contributors include: Matthew Vaughn [Producer], Michael “Eddie” Edwards [Former Olympic Ski Jumper], Dexter Fletcher [Director], Taron Egerton [Eddie Edwards], Matthew Margeson [Composer], Jack Costello [“Eddie” 15 years old], Nadia Stacey [Hair & Make-up Designer], Keith Allen [Terry/Dad], Jo Hartley [Janette/Mum], Hugh Jackman [Bronson Peary], Iris Berben [Petra], David Reid [Producer], Christopher Walken [Warren Sharp], Hugh Jackman [Bronson Peary] and Vic Armstrong [2nd Unit Director].

Special Feature: Deleted Scenes [2016] [1080p] [2.39:1] [4:52] Here you get to view four deleted scenes, which are as follows: FOOTBALL; SNOWPLOUGH; ICE SKATING and POSTCARD. As usual you can either watch each item separately or Play All.

Finally, ‘EDDIE THE EAGLE’ [2016] is an old fashioned crowd pleasing story of Olympic inspiration, which is equally as good and bad as that sounds. A brilliant fun ride, but just like our hero in this film will not be taking home any medals. Matthew Vaughn has been quoted as saying; ‘EDDIE THE EAGLE’ is the feel-good inspirational film the world needs now more than ever. ‘EDDIE THE EAGLE’ is a guaranteed winner, providing a light but inspiring take on the heart-warming story. The action is also shot exceptionally well, really placing the viewer firmly in the skier as the jumps take place. With Taron Egerton and Hugh Jackman are on fine form, and this will delight anyone looking for a brilliant feel-good comedy with lots of highs. With the real Michael “Eddie” Edwards heaping praise on the film with his struggle to be recognised as someone who is dedicated to showing the world he can be just as good a ski jumper as anyone else. The film ‘EDDIE THE EAGLE’ gives viewers a wonderful message that perseverance and determination is always a winning combination in life and Michael “Eddie” Edwards proved it 100%. Highly Recommended! 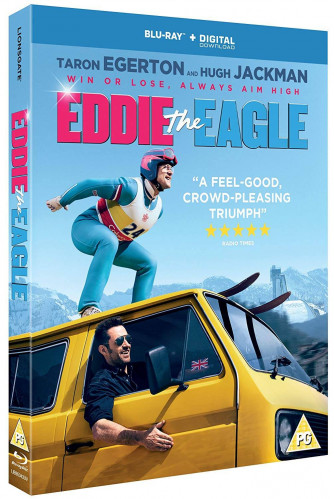 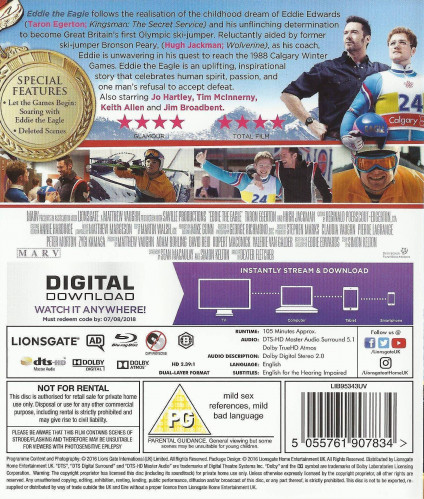