ELYSIUM [2013] [Limited Edition SteelBook] [Blu-ray + ULTRAVIOLET] [UK Release]
From the Director of District 9! The Best Place To Live is Not on Earth!

In the year 2154, two classes of people exist: the very wealthy, who live on a pristine man-made space station called Elysium, and the rest, who live on an overpopulated, ruined Earth. Secretary Delacourt [Jodie Foster] will stop at nothing to preserve the luxurious lifestyle of the citizens of ELYSIUM – but that doesn't stop the people of Earth from trying to get in by any means they can. Max De Costa [Matt Damon] agrees to take on a life-threatening mission, one that could bring equality to these polarised worlds.

Andrew's Blu-ray Review: This is a sci-fi drama starring Matt Damon and Jodie Foster, ‘ELYSIUM’ is set in the future, when two classes of people exist: the very wealthy, who live on a pristine man-made space station called ELYSIUM, and the rest, who live on an overpopulated, ruined Earth.

It is the year 2154 and the wealthy have fled the overpopulated and largely resource-drained Earth in favour of ELYSIUM, a luxurious space habitat located in the planet's orbit. With no poverty, no sickness and no war, the contrast between ELYSIUM and the ravaged planet it revolves around couldn't be starker, and is tough for those left on Earth to bear. When Max De Costa [Matt Damon] learns that he has no hope of beating the cancer that has afflicted him without breaking into ELYSIUM, and Max De Costa understands the scale of the task he has undertaken. With Secretary Delacourt [Jodie Foster] charged with enforcing ELYSIUM's strict anti-immigration policies and a team of hardened troops at her disposal, led by the ferocious Agent Kruger, Max De Costa faces the battle of his life if he intends to bridge the cosmic gap between rich and poor.

Max De Costa grew up looking to the heavens, but that doesn't mean he looked very far. Rather than distant stars or even the Earth's own moon, he set his gaze upon the largest object in the sky: ELYSIUM is a manmade paradise reserved only for the wealthy and the fortunate. They built the station some time before and left behind the overcrowded, resource-dry Earth for a green, clean paradise in the heavens. Max De Costa always promised his friend Frey [Alice Braga] that he'd get them to ELYSIUM. Years later, Max De Costa is still on Earth, slaving away at a job manufacturing the very law enforcement robots that harass him, injure him, and extend his parole. Frey's life hasn't been much better. She's a doctor but cannot help her sickly daughter Matilda [Emma Tremblay] who could be healed in mere moments with ELYSIUM's radically advanced medical technology. When Max is accidentally irradiated at work, he's given only days to live. His only option is to reach ELYSIUM and its healing bays, a task that's nearly impossible given its fortifications and armaments and the people ready to use them, chief amongst them Secretary of Defence Jessica Delacourt [Jodie Foster]. Max De Costa makes a deal to participate in an information-gathering raid on a high-ranking Elysium citizen named John Carlyle [William Fichtner] to gather intelligence on the heavenly paradise. In exchange, Max De Costa is offered a forged ELYSIUM identification tag and, therefore, a cure for his ailment. Matters are complicated when a dangerous Elysium sleeper agent named Kruger [Sharlto Copley] is ordered to intercept Max De Costa at all costs.

But the gunfire and fisticuffs are nevertheless done very well, as is all of the other glitz and glamour and production values the film has to offer. ELYSIUM is careful not to allow its action to overwhelm the plot. Instead, every gunfight and every action scene flows naturally from the story, a consequence of the drama rather than its driving force. It's very well-staged and expertly executed with a precision but also a rawness that together give the movie an edge and compliment the bloody, gritty reality of the world and story, not to mention the  mechanical add-ons that superficially aid and shape the characters but not nearly as much as does their underlying humanity, or lack thereof. Even Matt Damon’s character Max De Costa is, to a large extent, the classic reluctant hero type whose life is defined by a distant dream and the forced existence that keeps him from it. Sharlto Copley's character Kruger, aside from the obvious play on the name, turns in the film's best performance as a wild, uncontrollable, unpredictable nasty hunter. The large cast is supported by terrific visuals, in many ways much the same style as seen in the film ‘District 9,’ from the slums to the exploding bodies, from the robots to the flying ships. Nevertheless, it all fits into this world effortlessly and, in a way, beautifully. The effects are seamless, which is a critical factor in making the film as absorbing as it can be, and effectively dazzling the audience, while at the same time keeping the scenario well thought out, which is equally important, especially with the calibre of the film.

Blu-ray Image Quality – ‘ELYSIUM' features a reference-quality image transfer. Sony's “mastered in 4K” presentation looks magnificent in every scene, revealing superb colours and clear pinpoint details for the duration of the film. The subtle palette of colours appears regular throughout the film, even in the largely barren, earthen sandy future Los Angeles, the colours take on a very even, natural, lived-in appearance, from clothing to the graffiti on the walls. Things look even better on ELYSIUM. Green grasses, red robots, and all variety of bold, bright colours sparkle, and distance shots of Earth's blue waters look positively stunning. Darker moments, too, enjoy natural balance, aided a great deal by deep, positive blacks. Flesh tones enjoy natural shading. Fine detail is terrific. Close-ups of worn-down technology, weapons, skin textures, frayed clothing, dirt terrain, and crumbling structures show very real, very tactile attention to detail. Image clarity is superb in every scene, whether evident in the clean lines of ELYSIUM or the downtrodden Earth locations. The image is impeccably clean and shows no signs of blockings, banding, or other troublesome elements. This is a terrific image in every regard.

Blu-ray Audio Quality – ‘ELYSIUM' explodes onto Blu-ray with a powerful 7.1 DTS-HD Master Audio soundtrack. As one might rightly expect of a major studio new release of a futuristic Action/Science Fiction film, track dynamics are impeccable, spacing magnificent, and the overall effect one that replicates a theatrical experience down to the lightest note and tiniest bit of ambient support. Musical delivery enjoys even, rich front-side spacing, impeccable clarity through the entire range, balanced surround support, and precision bass. Action effects rightly dominate. Gunfire practically tears apart the soundstage while literally shredding in-movie environments. It's loud, precise, heavy, and both exhilarating and frightening. The rumble of ships, the wallop of explosions, and all variety of chaotic sound effects satisfy in every scene. Light ambience helps define a number of scenes, whether zipping vehicles or the din of a busy factory. Dialogue plays evenly and firmly from the centre. This is another winner from Sony Pictures Home Entertainment.

Special Feature: Visions of 2154 [2013] [1080p] [1.78:1] Here we get to explore totally amazing conceptual art, 3-D models and visual effects progressions which provided inspiration for the year 2154. In essence, this is a basic user-controlled slideshow supplement that offers art, behind-the-scenes video, clips from the film, and more.

Special Feature: The Journey to ELYSIUM [2013] [1080p] [1.78:1] This three-part documentary begins with envisioning ELYSIUM [8:46] Here we take a look at the story and its origins. It moves on to examine script development, designing the world with the exactness the director Neill Blomkamp demands, digitally and practically building the world, shooting locales, and fitting the actors with exoskeletons. Capturing ELYSIUM [26:31] Details the shooting process. It takes audiences onto several sets and peeks behind-the-scenes throughout the shoot. It also studies the differing looks for the Earth and ELYSIUM locations, makeup, and the making of several scenes in a handful of cities in some detail. Finally, Enhancing ELYSIUM [10:31] Focuses on the post-production process, including editing, sound design, and scoring.

Special Feature: In Support of Story: The Visual Effects of ELYSIUM [2013] [1080p] [1.78:1] [10:34] As the title suggests, the piece looks at effects construction but also the way they enhance the film. The piece focuses on the “Raven” and other flying vehicles, the robots, and a scene depicting the repair of damaged flesh. Contributors include: Neill Blomkamp [Director], Andrew Chapman [Visual Effects], TyRuben Ellingson [Conceptual Designer], Peter Peter Muyzers [Special Effects Artist] and Shawn Walsh [Visual Effects].

Sneak Previews: Here we get to view additional Sony Blu-ray Titles that are available.

Finally, ‘ELYSIUM' isn't so dissimilar with another recent film ‘Upside Down’ depicting two distinct classes of people living in proximity to one another and separated not by artificial boundaries but rather the real dividing line of gravity and the more artificial division of wealth and privilege. That film shapes its tale as a romance while ELYSIUM's action-oriented story tackles a political agenda that's today forefront on every news page, blog, and television news station around the world, and particularly in the United States. It's a rather heavy-handed film, not masking its agenda and sometimes not taking all the truths of utopia and man into account, rather focusing on broad ideals and stereotypes. That doesn't make it a bad film, though. On the contrary, it's quite entertaining and very well made, while still a film ripe for further dissection in both with the study of the film and the politics for a number of reasons and with almost no end to the possibilities for analysis. It doesn't capture the same balance between storytelling, social commentary, and action as in the film ‘District 9,’ but director Neill Blomkamp has certainly proven that he knows what he's doing behind the camera. Sony's Blu-ray release of ‘ELYSIUM' features reference quality video and audio. The only negative aspect of this film is that Neill Blomkamp had to have some tokenism South African actors included and this I found not very conducive and very jarring, as the accent for a start is so off putting, especially the really nasty negative character Kruger that eventually got his comeuppance and again I feel this particular actor could have been played by someone who can act and is not like a cardboard cut-out and was not very convincing and was a serious bad element towards the film, but despite this slightly negative aspect of the film, I still think it is a very outstanding film and a joy to watch, especially with this Exclusive Limited Edition SteelBook and it is a great honour to add this to my extensive SteelBook Blu-ray Collection. Highly Recommended! 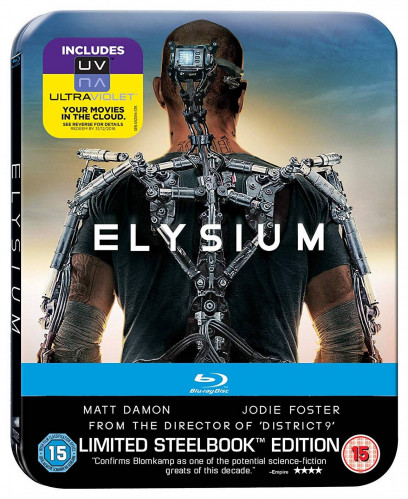 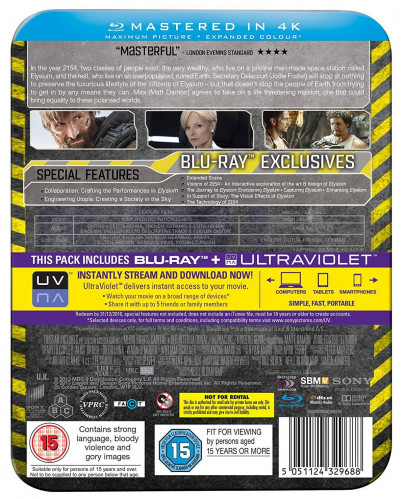