From the creators of 'Ice Age' comes the year's most exhilarating animated adventure! Transported to a magical world, where a teenager Mary Katherine [Amanda Seyfried] is recruited by a nature spirit, Queen Tara [Beyoncé Knowles], to help the “Leafmen” save their forest from evil warriors. The whole family will love this fast-paced thrill-ride, with its astonishing animation and an all-star voice cast that includes the voices of Josh Hutcherson, Colin Farrell, Christoph Waltz, Aziz Ansari, Chris O'Dowd, Pitbull, Jason Sudeikis and Steven Tyler. Go deeper with this fun-filled Blu-ray, with exclusive features!

Andrew's Blu-ray Review: In the Blue Sky Studios animated feature film, we find Mary Katherine M.K [Amanda Seyfried], is in a hard period of her life. The animation film opens shortly after her mother's funeral. Not quite old enough to be on her own, she is moving in with her father Bomba [Jason Sudeikis], who she hasn't seen in years. M.K.'s parents divorced long ago, a major source of the marital problems being her dad's obsession with his scientific work. Sadly, nothing has changed. Bomba still places 100 percent of his efforts in proving that tiny people exist within the forest. He believes that these small people, known as Leafmen; who serve as the guardians of nature. Of course, we quickly learn that he is correct, that the Leafmen are in a constant battle against equally tiny bad guys called the Boggins; who promote rot and decay.

Shortly after M.K. arrives at her father's home, the lore of the forest is explained to us. You see, forests have always thrived because a powerful fairy Queen Tara [Beyoncé Knowles] carries the spirit of the forest. Every so many years, she passes that spirit along to another being. The day that M.K. arrives just-so-happens to be the day that the queen is going to pass along the spirit. As the Leafmen assist the Queen Tara, the Boggin army attacks and thwarts their plans, trying to steal the spirit of life and corrupting it with rot. As M.K. wanders through the forest, she stumbles upon the queen and gets pulled into their world and shrunken down and everything. With the help of the head of the Leafmen Ronin [Colin Farrell] and a cute young Leafmen soldier Nod [Josh Hutcherson], M.K. must restore a healthy balance to the forest and put a stop to the Boggins decay before it can destroy the entire forest.

There are plenty of wordy serious moments, but they're intermingled with good fun. Just to keep the kids entertained, there are even silly childish moments, especially those with the Slug [Aziz Ansari] and Snail [Chris O'Dowd]. A good amount of comedy is infused for the parental audiences. Here's to hoping that this upward trend of light-heartedness and humour continues and that DreamWorks Pictures has a positive influence on 20th Century Fox. By the way, as a sort of protest, I here and now declare that I hate and detest Chris O'Dowd, as I think he is one of the worst actors in the world, who is most the thick stupid actor to ever be on this planet and I wish he was banished forever.

Although the script is a bit hit and misses, at least the voice cast carries the film right along. The surprise performance comes from Josh Hutcherson, who is rather boring in his live-action film roles, but his vocal performance in 'Epic' is easily the best thing that he's done so far. Seyfried, Beyoncé, Aziz Ansari and Chris O'Dowd are solid. Colin Farrell is very good. And a few other surprise performances come from Steven Tyler and Christoph Waltz. Of course Christoph Waltz's unmistakable voice is lent to the villainous head Boggin. 2013 was loaded with lots of animated family films, but none of them have been amazing, but to me 'EPIC' is one of the year's better 3D animation film.

3D Blu-ray Image Quality – Blue Sky Studios presents us this animated film 'EPIC' 3D with an absolutely flawless 1080p image in an equally awesome 2.40:1 aspect ratio. Animation is always the best format for viewing 3D Blu-rays and 'EPIC' 3D is no exception and looks even more stunning, than when I saw this 3D release in the cinema. 'EPIC' 3D doesn't use gimmicky 3D of forcing images off the screen, which is rare for a 3D animation film. Instead, it pushes the world of the film deep beyond the face of the television, as if the borders of the screen are the framing of a window. The world created is visually appealing, appearing like the images of fantasies in the mind of a child. Taking place in large settings, there are layers upon layers of material that extend the picture far into the background. From dust particles floating through the foreground to the blowing trees of the background, the distance between the two is an infinite playing field for the action of the film. There is never a lack of depth. The filmmakers ensured that objects are constantly placed in all areas of this setting. While some films make you forget that you are watching a 3D film, but with 'EPIC,' the amazing environments are subconscious realistic. I appreciate the amount of detail that 'EPIC' 3D was given. The lighting of the forest gives the picture a warm and glowing softness that carries a stark contrast with the lifeless world of the Boggins. No matter which of the two settings we're in, fine details are visible. Be it hairs on a bee's body, leafy patterns, rough bark or oily bird feathers, textures and fine features can always be seen. The animation film is so strong that it leaves no room for banding or aliasing. Colours are so vibrant that when we see the grey result of the Boggins; decay, and the gravity of their rot carries a strong emphasis. Black levels are deep and rich without removing the fantastic fine details. After watching the film twice, once in 3D and once in 2D, I cannot find a single fault with the impressive image quality.

3D Blu-ray Audio Quality – Blue Sky Studios brings us 'EPIC' 3D with an awesome 7.1 DTS-HD Master Audio experience and so much love has been put into the audio mix as with the image quality. From the very opening scene, the amazing dynamics of the audio mix become evident. Set mostly in forests, environmental sounds of cicadas, birds and bugs are layered throughout the channels. The sounds of a breeze blowing through leaves of a tree create an imaging effect that allows you to follow the direction of the wind. Other sounds, such as soaring arrows or passing bats and birds, also show off the strength of imaging. All speakers are constantly lit up with these great examples of environmental effects mixing. The vocal tracks are absolutely clean and clear. Large crowd scenes offer background banter that emits from all channels. Music also plays perfectly. Be it Steven Tyler's in-movie song, Beyoncé Knowles singing the closing credits or Danny Elfman's brilliant film music score, the music is a great-sounding epic experience.

Special Feature: Bugs of Camouflage [2013] [1080p] [2.40:1 / 1.78:1] [3:44] Here we take a look at some of nature's very best bugs at blending in and surviving and we are introduced to Ken [The Bug Guy] who explains all aspects of the bugs camouflage technique and shows off all the different insects and animals he has in his collection.

Special Feature: The 'EPIC' Life at 2 Inches [2013] [1080p] [2.40:1] [3:42] Here is a special feature made specifically for adults! This brief video scientifically explains how the human body would function at a height of two inches. Who knows how factual this information is, but it's definitely interesting and well worth viewing for younger children.

Finally, because the trailers for 'EPIC' made it out to be a mish-mash of other family films, I literally expected nothing from it when I popped in the 3D Blu-ray disc. Much to my surprise, I found it to be quite enjoyable and much better than the most of this summer's other family films and enjoyed it from beginning to end. The story of 'EPIC' isn't the most unique, but it also isn't without its creative charm. The flawless audio and video qualities of the 3D Blu-ray are just another reason this set is a worthy purchase. Most of the special features are directed towards mainly children, but there is a decent 25-minute making-of for the adults also. So all in all this is an amazing Blu-ray packaged and a totally entertaining experience and again the 3D was also totally awesome and made you feel you was in the actual forest and I am so proud it has been added to my 3D Blu-ray Collection. Highly Recommended! 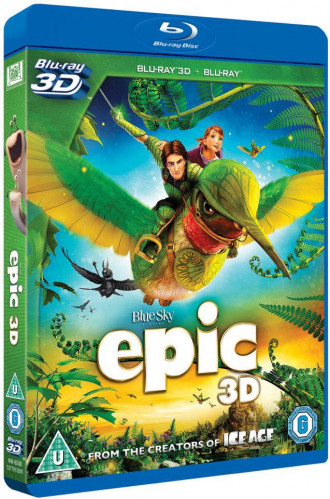 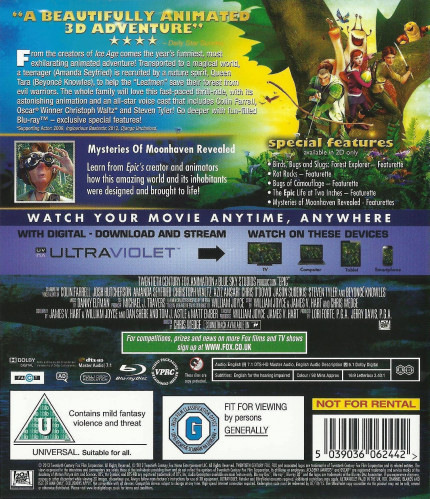