Matthew McConaughey and Kate Hudson go for the gold, the diamonds, emeralds and rubies. As a just-divorced couple who bicker and banter their way through an adventure and laugh-packed undersea treasure hunt. Mathew McConaughey is Ben "Finn" Finnegan, in love with his ex-Tess Finnegan [Kate Hudson] and in deep with gangster Bigg Bunny Deenz [Kevin Hart]. After eight years of searching, Ben "Finn" Finnegan gets a clue to the whereabouts of the Queen's Dowry, a fabulous fortune that mysteriously disappeared in the Caribbean in 1715. Now all he has to do is get the gold, get the girl and get going before Bigg Bunny Deenz gets him. Directed by Andy Tennant's ‘FOOL'S GOLD'  glitters with danger, action, romance, comedy, great one-liners and a great time to be had by all!

FILM FACT No.2: Warner Bros. and director Andy Tennant planned to shoot the film in the Caribbean, but decided on Queensland, Australia because the hurricane season in the Caribbean was likely to stall production of the film. The Key West scenes were filmed in Port Douglas and citation was needed. Filming also took place in Brisbane, the Gold Coast, Hamilton Island, Lizard Island, Airlie Beach, and Hervey Bay. Scenes were also filmed at Batt Reef, where Steve Irwin died from a stingray barb in 2006. Inside scenes were shot on a sound stage at the Warner Bros studio facility and the actors and crew stayed in luxury homes and apartments on the Gold Coast. Matthew McConaughey mentioned having a python in the backyard of his house in Port Douglas. Matthew  McConaughey said, "There were other days like the day we went out diving and swam with a dugong, which was very cool.” Two crew members were stung by Irukandji jellyfish during filming, so some of the water scenes were shot in the Caribbean because the actors were so frightened. At the time of filming, The Precious Gem luxury motor yacht in the film was called the Keri Lee and has subsequently been renamed "Penny Mae". It was designed by yacht architect Ward Setzer of Setzer Design Group and originally named Status Quo.

Andrew's Blu-ray Review: About Five years ago, Hollywood paired Kate Hudson and Matthew McConaughey in the romantic comedy ‘How to Lose a Guy in 10 Days’ and the match rewarded the filmmakers with box office receipts exceeding $100 million. No doubt the hope was that a reunion of these two in a script intended to recall ‘Romancing the Stone’ would reap similar benefits. Now the actors are reunited in this “rom-com” film ‘FOOL'S GOLD’ and do not have such a negative attitude like most of the critics who slated this film, I on the other hand love this film.

The film follows Ben "Finn" Finnegan [Mathew McConaughey], who is a rascal of a treasure hunter who is obsessed with finding the wreck of an old Spanish boat off of the coast of southern Florida. When the boat he was loaned from a gangster named Bigg Bunny Deenz [Kevin Hart] sinks, he finds himself on the receiving end of some nastiness from a pair of dreadlocked hit-men, one of whom is Malcolm  Jamal Warner from ‘The Cosby Show.’ He escapes from them just in time to make it to the courthouse where his wife, Tess Finnegan [Kate Hudson] who at last has divorced him. They begrudgingly decide to go their separate ways and be done with it, but you just know that isn't going to last.

When, seemingly by fate, Ben "Finn" Finnegan finds himself saved by the boat of a wealthy man named Nigel Honeycutt [Donald Sutherland] and his daughter Gemma Honeycutt  [Alexis Dziena], and he is surprised to find Tess Finnegan working on board. Of course, Ben "Finn" Finnegan convinces everyone to join him on his treasure hunt and they all rush to find the loot before a competing group of treasure hunters or the aforementioned gangsters can beat them to it.

Donald Sutherland is mildly amusing in his supporting role as  the wealthy yacht owner and Alexis Dziena [Gemma Honeycutt] is at least fun to look at but really, not a single actor or actress in this film delivers anything even close to a memorable performance. At 112 minutes in length to a lot of critics they felt the film was far too long for its own good, well instead I loved it all the way to the very end and watching the film gave you chance to get to know the foibles of all the characters.

LET’S GET IT CRACKIN’ (Written by Ali Dee, Vincent Alfieri and Alana Da Fonseca) [Performed by DeeTown DeeTown All Stars]

Blu-ray Image Quality – ‘FOOL'S GOLD’ is brought to you on Blu-ray in a stunning awesome 1080p encode image, plus a really brilliant 2.40.1 anamorphic widescreen transfer. The image quality is a bit of a mixed bag here. Most of the film takes place on or around the ocean and so there's a lot of blue on the screen at all times. There are some nice lush locations used and the colours really should pop off the screen - and they do... a little too much. The blues are a bit overdone as are some of the yellows and oranges and the picture winds up looking kind of fake. Flesh tones look a bit waxy in spots and darker levels loose some fine shadow detail. Now, this is probably the look that the filmmakers were going for - the film really does feel sun-drenched and tropical for much of its run time. There are parts of the movie that look nice and clean and sharp and natural.

Blu-ray Audio Quality – Standard 5.1 Dolby Digital Audio experience option. While there aren't any problems with this perfectly acceptable standard audio mix, it would have been nice to see Warner Bros. take advantage of the possibilities that Blu-ray offers. Surrounds are well used and dialogue stays clean and clear from start to finish. There aren't any problems with hiss or distortion and everything is well balanced. That said, it doesn't provide the same level of depth that a good 5.1 Dolby TrueHD or 5.1 DTS-HD Master Audio mix does and because of that it's a bit of a disappointment in that regard. The audio here is fine but it really should have and could have been much better.

Special Feature: Fool's Gold: Flirting With Disaster – The Chemistry Between Two Charming Contemporary Stars [2008] [480i] [1.37:1] [3:54] This special feature looks at the chemistry and working relationship shared between Matthew McConaughey and Kate Hudson. This is pretty superficial stuff and it lends exactly zero insight into the making of the film despite input from the two stars as well as Donald Sutherland and director Andy Tennant.

Finally, ‘FOOL'S GOLD’ cinematography is pretty breath-taking. An early scene with Finn's burning boat... then the sinking of the boat... is very well staged well and is probably the funniest moment in the film. The score is fun and in keeping with the tone of the film. There are definitely some effects and scope that announces there's money behind this production, but it doesn't do anything to elevate it's enjoy ability. Australia was used to sub for the Bahamas and that has jaw dropping crystal clear water landscape is used to great effect, but it looks pretty damn good. After reading countless crass critics lambasting's this production, it adds itself in this reviewer's mind - to a number of films that are savaged unnecessarily. No, it's not a masterpiece, but is that the benchmark we critics are expecting for a film to be enjoyable? I hope not, I wonder what they're all expecting from this film. I originally saw Matthew McConaughey's stunning film ‘SAHARA,’ which I now have in my Blu-ray Collection, and again I also really loved and I understand this film is a companion to it, and again I do not know why so many critics were so negative towards the film ‘FOOL’S GOLD,’ as it is just a massive gigantic hilarious "rom-com" film with an added bonus of really beautiful lush exotic landscapes and I personally think the other pompous critics are totally wrong about this film and to me I am honoured to have this brilliant funny 112 minute film in my Blu-ray Collection and I will not have any negative comments said about this film. Highly Recommended! 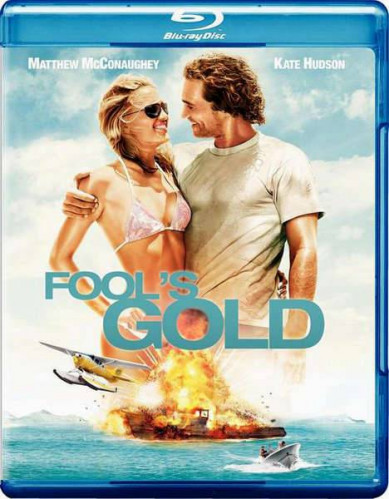 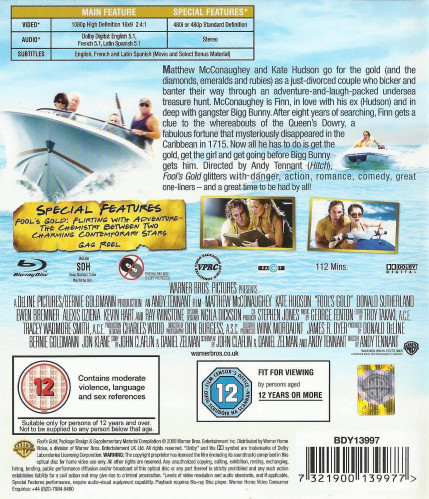