During the Apollo lunar missions from 1968 to 1972, those on-board were given 16mm cameras and told to film anything and everything they could, in space, in orbit, and on the surface of the moon itself. Two decades later, filmmaker Al Reinert went into the NASA vaults to create this extraordinary compendium of their journeys and experiences.

Assembled from hundreds of hours of the astronauts own footage, with a soundtrack made up of their memories and a specially composed music score by Brian Eno. The film takes the form of one journey to the moon and back again, building with elegant simplicity and exquisite construction to create an overwhelming vision of human endeavour and miraculous experience.

At once intimate and awe-inspiring, ‘FOR ALL MANKIND’ is a genuinely mesmerising first-hand document of one of the high points of the 20th century. The Masters of Cinema Series is proud to present Criterion’s beautiful high-definition restoration of the film for its UK home viewing première in a comprehensive, director-approved edition.

FILM FACT No.2: The title comes from President John F. Kennedy's Address to Rice University on the Nation's Space Effort, on the 12th September 1962, but is slightly altered from "for all people" to "for all mankind" and “The exploration of space will go ahead, whether we join it or not, and it is one of the greatest adventures of all time ... We set sail on this new sea because there is new knowledge to be gained and new rights to be won, and they must be won and used for all people ... We choose to go to the moon. We choose to go to the moon in this decade and do the other things, not because they are easy, but because they are hard ....” The phrase was altered in the film's audio of President John F. Kennedy's speech as well. The director dubbed in "mankind" from a different President John F. Kennedy speech. The term “For All Mankind” also appears on the lunar plaque left by the Apollo 11 astronauts: Here men from the planet Earth first set foot upon the Moon, July 1969 AD. We came in peace for all mankind.

Andrew’s Blu-ray Review: ‘FOR ALL MANKIND’ [1989] tells the true story of the 24 men who travelled to the moon as the entire population of the USA and the World watched in awe.

Sorting through nearly one hundred hours of film and sound recordings recovered from NASA and shot between December 1968 and November 1972, in the heyday of the space programme and director Al Rienart has pieced together a seamless documentary commemorating man's landing on the moon.

The film is a montage of images with voice-over interviews and comments from the participating astronauts of the moon landing. Brian Eno, famous for his ethereal music, provides the score.

‘FOR ALL MANKIND’ presents an exhilarating portrait of an incredible human achievement, and was nominated for the Best Documentary Oscar in 1989. During the Apollo lunar missions from 1968 to 1972, those on board were given 16mm cameras and told to film anything and everything they could, in space, in orbit, and on the surface of the moon itself.

Two decades later, filmmaker Al Reinert went into the NASA vaults to create this extraordinary compendium of their journeys and experiences. Assembled from hundreds of hours of the astronauts' own film footage, with a soundtrack made up of their memories and a specially composed music score by Brian Eno, and the film takes the form of one journey to the moon and back again, building with elegant simplicity and exquisite construction to create an overpowering vision of human endeavour and miraculous experience.

‘FOR ALL MANKIND’ remains shocking in its beauty. In the film, there’s a shot of the moon in partial shadow, floating against an impenetrable, obsidian-coloured backdrop — “moving in a blackness that is almost beyond conception,” Gene Cernan, an astronaut who flew the Apollo 10 spacecraft and commanded the Apollo 17 mission, narrates in the background. In the voice-over, Gene Cernan describes the uncanny sight in terms befitting a philosopher rather than an aeronautical engineer and fighter pilot: “You have to literally just pinch yourself and ask yourself the question, silently, do you really know where you are at this point in time and space, and in reality, and in existence?”

But most important, here are several amazing specific views and memorable views that we get to experience via the astronauts in the film ‘FOR ALL MANKIND’ and they are:

The fires of the Bedouin tribes in the Sahara desert, seen as dots of light in the extreme darkness.

Sunrise over the edge of the Earth.

A space-walk floating in silence over the Earth, despite travelling at 25,000 miles per hour.

A floating tape recorder providing music to the astronauts during periods of weightlessness ... in particular when playing the theme from the 1968 film, ‘2001: A Space Odyssey.’

The first picture of the Earth seen as a whole circle from space "floating in a blackness beyond perception.”

Trying to prevent food from floating off during meals.

The first close-up pictures of the Moon.

Travelling around the far side of the Moon, including the "Earthrise" as our planet came back into view.

The Apollo Lunar Module calmly drifting down at a low angle to the surface of the Moon, then burning its engines for a more vertical landing.

Touchdown in the Sea of Tranquility: "The Eagle has landed."

The first footstep onto the Moon by Neil Armstrong.

David Scott dropping a feather and a hammer together on the Moon to prove Galileo correct, that both hit the ground together if there is no atmosphere.

Erecting the Stars and Stripes on the surface of the Moon

Gathering rocks and soil samples from the surface of the Moon.

An astronaut tripping and speculating on his vulnerability should the suit be ruptured.

Blu-ray Image Quality – Apollo Associates, EUREKA Entertainment and the cooperation with The Criterion Collection presents this stunning 1080p image and because of the age of the film, it is only presented in the 1.37:1 aspect ratio. This Blu-ray release was supervised and approved by producer/director Al Reinert. This new high-definition digital transfer was created on a Spirit Datacine from a 35mm interpositive. Instances of dirt, debris, scratches, splices, warps, jitter and flicker were removed manually using MTI’s DRS system and Pixel Farm’s PFClean system, while Digital Vision’s DVNR system was used for small dirt, grain and noise reduction. This EUREKA Entertainment Blu-ray release gives a good solid detail, the colour image is very good, and the clarity is very impressive. As expected, the image remains notably stable. All in all, this is indeed an excellent and awe inspiring image presentation of a very historic film that should please even the most demanding critics amongst you. Please Note: Playback Region B/2: This will not play on most Blu-ray players sold in North America, Central America, South America, Japan, North Korea, South Korea, Taiwan, Hong Kong and Southeast Asia. Learn more about Blu-ray region specifications.

NOTES ABOUT THE AUDIO: In January 1989, ‘FOR ALL MANKIND’ was screened at the Sundance Film Festival with a mono track featuring, among other differences; where an alternate selection of Brian Eno’s music was used. This version was broadcast on BBC 2 later that same year. Thanks to Janus Films, the filmmakers created a Dolby Stereo mix for the film’s theatrical release, and later a Dolby 5.1 mix was carefully remastered and remixed from the original audio source under the director’s supervision. This definitive soundtrack has the choice of being heard in either 2.0 or 5.1 mix on this Blu-ray release.

Special Feature: An Accidental Gift: The Making of ‘FOR ALL MANKIND’ documentary [2009] [1080p] [1.78:1/1.37:1] [32:02] This documentary features interviews with Director Al Reinert, Apollo 12 and Skylab astronaut Alan Bean, and NASA archive specialists. "The decade-long Apollo program was the largest and most expensive undertaking in the history of man that wasn’t devoted to a war. During the four years between December 1968 and November 1972, there were nine manned flights to the Moon. Twenty-four men made the journey; twelve actually landed on the lunar surface. They were the first human beings to leave the planet Earth for another world." Director Al Reinert searched extensively via the NASA’s film repository at the Johnson Space Center to create ‘FOR ALL MANKIND.’ This 2009 program explores his commitment and the materials used, with comments by Al Reinert, Apollo 12 astronaut Alan Bean, NASA film editors Don Pickard and Chuck Welch, film vault curator Morris Williams, and lead librarian Mike Gentry. Contributors include: Al Reinert (Filmmaker/Screenwriter), Don Pickard (NASA Film Editor), Alan Bean (Apollo 12 Astronaut), Chuck Welch (NASA Film Editor), Morris Williams (NASA Film Vault Curator) and Mike Gentry (NASA Lead Librarian).

Special Feature: Paintings From The Moon [2009] [1080p] [1.78:1] [8:00] In this special feature, here we meet Veteran-Astronaut-Turned-Artist Alan Bean present us with his paintings of another world by an artist who was actually there on the Moon, and also shows in his personal collection from his mission to the Moon which includes small samples of moon dust and items relating to the Apollo spacecraft. Apollo 12 Astronaut Alan Bean was the fourth man to walk on the moon, and he later commanded the Skylab 3 mission, staying a record fifty-nine days in space. After retiring from NASA, he turned full-time to his other passion, and that was painting and Alan Bean’s first earliest attempt at painting were My Mother’s Love [1962] and California Dreaming – The Lone Cypress [1986]. We also get to see Alan Bean in his studio working on one of his Moon paintings. As a bonus, Alan Bean offers a personal audio commentary on presenting a selection of images his Apollo theme paintings, and explains what each painting was meant to portray of his trip to the Moon and also why he decided to paint his fellow astronauts and I must say that the paintings are very impressive. Anyway here is what you get to view:

Special Feature: NASA Sound Archive: Here we get twenty-one audio sound bites, which were collected from the first ten years of the American space program, and here is what you get to hear:

As usual, you can either hear each archive sound recording individually or Play All. Running Time: 6:44

BONUS: Here we have a glorious 28 page luxurious full-colour booklet featuring essays, rare stills, interviews, and much more. The contents of the booklet are as follows: ABOUT THE TRANSFER. A NOTE ABOUT THE AUDIO. AL REINART ON FOR ALL MANKIND. BACKYARD WONDERS. APOLLO: ATMOSPERE & SOUNDTRACKS. NOTES ON VIEWING. What you also get to view is some amazing rare colour photographs.

Finally, ‘FOR ALL MANKIND’ is stunning film that was pieced together from the archive footage of the Apollo missions, the huge USA project that took men to the moon for the first time. Rather than make a conventional documentary, director Al Reinert decided to create the story of one trip to the moon from different bits of many missions, with a soundtrack of the original conversations between the astronauts and ground control, plus later interviews with the men who went into space and the composed music by Brian Eno. Al Reinert film continues to fascinate because it quietly illuminates the scientific necessity of capturing the dazzling images of spaceflight. NASA collected incremental documentation of each of the Apollo flights, particularly during the crucial stage separations of the Saturn V rocket, in case disaster struck, as it had so many times leading up to the successful Apollo 11 mission. In order to insure that a visual record of each flight would be preserved, the Apollo astronauts would periodically jettison heat-resistant canisters of film footage back to Earth. The result is beautiful and awe-inspiring. Highly Recommended! 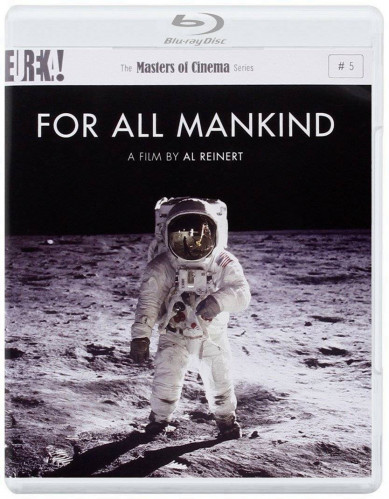 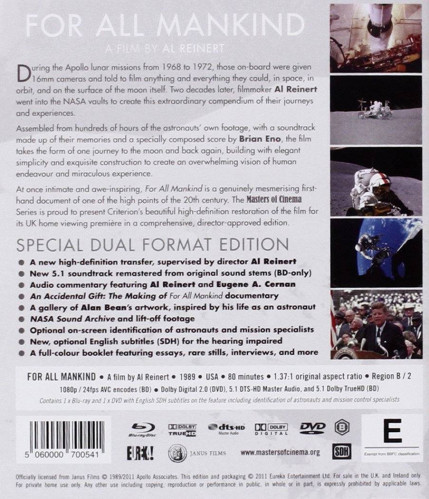