FILM FACT: Awards and Nominations: Golden Globes® for Best Actress for Musical/Comedy for Bette Midler. Academy Awards® for Best Actress for Bette Midler. Golden Globes® for Best Original Score Dave Grusin. Many of the U.S. Marines from Camp Pendleton, California were going to be used as extras in some scenes. Unfortunately, Operation Desert Shield started and many of them had to be shipped to the Middle East. Producers had to hire clean-cut civilians to fill the ranks.

Andrew’s Blu-ray Review: Eddie Sparks [James Caan] and Dixie Leonard [Bette Midler] first meet on a USO tour in England in 1942. Eddie Sparks, a comedian and song-and-dance man, who started out in vaudeville and has become a national institution, beloved for his one-liners and his lewd, crusty charm. Dixie Leonard is a peppy, ebullient songstress whose sharp-tongued wit can slice right through a ham like Eddie Sparks. The moment she gets up in front of the troops and starts lobbing double entendre his way, it’s clear that these two were meant to be a team.

The hardest thing Ms. Bette Midler has to do in ‘FOR THE BOYS,’ in this big sweeping multi-hanky musical, in which Ms. Bette Midler plays a USO entertainer named Dixie Leonard, is to pretend to be shy. When in 1942 Dixie Leonardis first approached to tour with an established star named Eddie Sparks, she is all butterflies. Can she perform before a large crowd? Will she get over her jitters? The film may dwell on these questions, but its audience knows full well that Dixie Leonard, being a lot like Ms. Bette Midler, can bring down the house even if she's playing an open-air arena in a war zone.

Onstage, Eddie Sparks and Dixie Leonard are in perfect synch. They can’t help trying to one-up each other, and audiences know their spunky, combative edge is the real thing; it’s what makes their act click. Offstage, the testy aggression that sparks them as performers congeals into sour backbiting. Nevertheless, in their sentimental show-biz hearts Eddie Sparks and Dixie Leonard are soul mates. The film, which takes them from World War II to Korea to Vietnam and finally to their big gala reunion in the present day.

‘FOR THE BOYS,’ is a custom-tailored showcase for Ms. Bette Midler's talents and it offers her a role in which screen character and offstage persona are powerfully intertwined. In the 1940's, a period toward which Ms. Bette Midler has always shown an affinity, an actress with a personality this strong would always have fused her own larger-than-life image with that of whomever she was playing. Today that happens less often, but Ms. Bette Midler has wisely taken the bull by the horns. Acting as one of her own producers, she has seen to it that ‘FOR THE BOYS’ offers her an appealing, frank, and always a pivotal leading role, one that no one else could have played.

‘FOR THE BOYS,’ directed by Mark Rydell, is at its best when concentrating on Dixie Leonard, which it does most of the time. First seen in elaborate makeup as a tough-talking, embittered old broad, she feigns infirmity but still manages to convey great reserves of grandmotherly zip. This makes a strong contrast with the film's next sequence, in which the elderly Dixie Leonard remembers her first encounter with Eddie Sparks. Looking rosy, young and vital, Ms. Bette Midler is an instant crowd-pleaser. And when she takes the stage with Eddie Sparks and walks off with the show, she takes command of the film as well.

‘FOR THE BOYS’ follows Eddie Sparks and Dixie Leonard through 50 years of what is essentially a rocky friendship and stormy business relationship, but not much more. This is surprising in view of the film's extravagantly romantic style and its portentous sense that some crucial development between Dixie Leonard and Eddie Sparks may be in the offing. In fact, the real emphasis is on Dixie Leonard as the mother of Danny, who is a small boy in the 1940's scenes and a soldier by the time the film gets to Vietnam. In a way, ‘FOR THE BOYS’ makes a clever choice in presenting Ms. Bette Midler more as a noble, long-suffering mother figure with a flair for wisecracks than as a garden-variety romantic heroine. But even allowing for its lack of romantic chemistry, despite a fleeting one-night encounter that has Dixie Leonard back to her same old scathing remarks in the morning, the film has trouble with its central relationship, in part because James Caan never makes Eddie Sparks the magnetic figure he is supposed to be.

Dixie Leonard works better in big, sometimes shamelessly sentimental tableaux than she does in intimate settings anyhow. This film's most touching moments generally occur either on Christmas or when Dixie Leonard and Eddie Sparks bring their act to war-torn places, first to North Africa, where Dixie Leonard is tearfully reunited with her husband and serenades him with; Come Rain or Come Shine before a large, appreciative military crowd.

‘FOR THE BOYS’ presents Ms. Bette Midler with some remarkable opportunities for heartstring-pulling, which she does especially well during the film's wrenching Vietnam chapter. Many other films have covered this territory, and done it better. But when Ms. Bette Midler performs an eerily delicate, anthem like rendition of In My Life; to a group of soldiers who have come face-to-face with their own mortality, she adds something new. It's a moment that lingers long after the film is over.

Also in ‘FOR THE BOYS’ are George Segal as the uncle who helps give Dixie Leonard her start, Arye Gross as the nice young man who coaxes her onto television one last time, Dori Brenner as an early colleague and Christopher Rydell as the grown-up Danny and such ringers as Melissa Manchester and Bud Yorkin in small roles. The cast is big and helpful, but the star is always centre stage.

‘FOR THE BOYS’ truly shines when Ms. Bette Midler is permitted to perform uninterrupted, unfortunately all too rare a circumstance. The few musical numbers Ms. Bette Midler sings, is a role patterned after the life and career of Martha Raye, is allowed to do justice to include a previously unheard Hoagy Carmichael composition. Carmichael-Paul Francis Webster song, Billy-A-Dick, along with the haunting Johnny Mercer-Harold Arlen standard, Come Rain or Come Shine, plus an all-to-brief performance of the energetic Stuff Like That There by Jay Livingston and Ray Evans and, finally, the Lennon/McCartney classic, In My Life.

Ms. Bette Midler is a unique and special performer whose way with a song is dynamite and, perhaps, if this film had much more footage devoted to what Ms. Bette Midler does best singing upbeat, snappy tunes and emotion-charged torch songs audiences have taken to ‘FOR THE BOYS’ so much more and a real tour-de-force performance.

But what has made me very puzzled and mystified me is that with other reviewers of this film, is that no one has pointed out the brilliant job that the behind-the-scene makeup artists, who have done a really fantastic and brilliant job in making Ms. Bette Midler and James Caan look totally brilliant in looking their age at the end of their career and the Academy Award® people were wrong not to give them some kind of award, then shame on them.

'FOR THE BOYS' in America it is rated R (Under 17 requires a parent or adult guardian when viewing this Blu-ray disc). It also includes many sexual innuendoes and off-colour strong language. But if you really loved the music in this film, like me and especially Ms. Bette Midler’s singing, then I totally recommend you purchase the stunning Compact Disc Soundtrack, as it has 13 stunning tracks that you hear in full.

FOR ALL WE KNOW (Music by J. Fred Coots) (Lyrics by Sam Lewis) [Performed by Bette Midler]

P.S. I LOVE YOU (Music by Gordon Jenkins) (Lyrics by Johnny Mercer) [Performed by Bette Midler]

UNDERNEATH THE ARCHES (Written by Bud Flanagan)

LAND OF 1000 DANCERS (Written by Chris Kenner and Fats Domino)

Blu-ray Image Quality – ‘FOR THE BOYS’ features a slightly uneven 1080p image transfer. With the close up shots, it gives slightly more than basic definition, especially on complex fabrics or faces. The picture transitions is lighter, more refined grain structure with significantly more complex and properly defined clothing and facial textures when the lighting improves, whether natural outdoor light or artificial interior light. More broadly, light edge halos crop up in spots, but the image doesn't battle any other severe ailments like banding or blocking. But despite this, ‘FOR THE BOYS’ still looks good. It's those other extremes, which make up a good portion of the film. But despite this I would still give it a 5 star rating for effort and still worth the purchase of this Blu-ray disc.

Blu-ray Audio Quality – ‘FOR THE BOYS’ has a brilliant 5.1 Dolby TrueHD soundtrack that is totally brilliant, and the tracks are healthy and involved. The music has some good spacing and room-filling volume effects to a good level and especially the instrumental detail and stage balance, are equally good. The surround sounds are really good especially with some of the dynamic action and effects that are more forcefully presented in the back speakers. The Vietnam sequence in particular offers helicopter rotors seeming to spin through the listening area, popping gunshots in the back, and heavy explosions filling the room, all with a fair bit of immersion and vitality. Dialogue is straightforward and satisfactorily and well defined. Song lyrics are solidly delivered with lifelike crispness and the sort of pinpoint definition one would expect of a brilliant film so musically involved as this.

Blu-ray Special Features and Extras: Sadly there are no extras, which is such a shame and at least they could have even supplied a Theatrical Trailer, plus there is no Menu of any kind, which is a really great surprise. The original company was 20th Century Fox and surely there must have had some outtakes or interviews with the stars.

Finally, ‘FOR THE BOYS’ has solid character drama, and everything that transforms something ordinary into something very extraordinary. The film goes through its emotions really well, and content offers a collection of brilliant drama and when it comes to parts of the film that are emotional, be ready to get the tissues out. Some critics said it was a little too long, well I totally disagree, as I felt it was just right, as you needed to get into the characters personality, but the film is equally saved by and worth watching because of the two dynamic lead performances from Ms. Bette Midler and James Caan. But what a shame Anchor Bay could not have found and provided some generous extras, as that part slightly lets this Blu-ray down, but despite this, it has gone pride of place in my Blu-ray Collection, as I am a massive fan of Ms. Bette Midler who always does a brilliant job in this film especially, a real professional trouper. Very Highly Recommended! 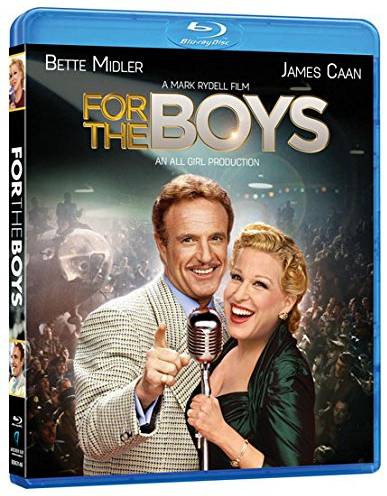 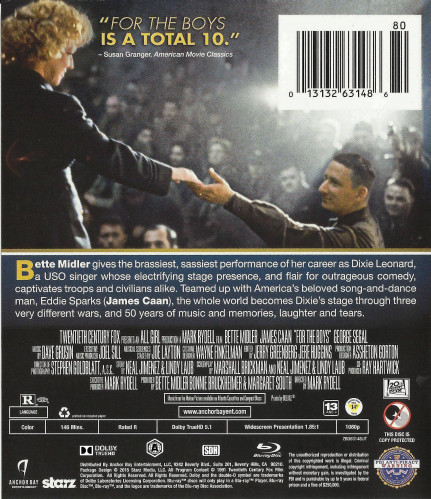