Arnold Schwarzenegger stars in the unforgettable action-comedy ‘KINDERGARTEN COP’ from director Ivan Reitman of `Ghostbusters' and `Twins.' Detective John Kimble [Arnold Schwarzenegger] is a veteran of the mean streets of Los Angeles, ready and able to tackle anything. In order to trap an elusive criminal, and Detective John Kimble is forced to face his most challenging assignment yet: going undercover as a kindergarten teacher. Now facing 23 screaming kids, he has to keep them under control without blowing his top and his cover. Once he gains the respect of his class, as well as the affections of a beautiful teacher, Detective Kimble must prepare for a final confrontation with his prey.

FILM FACT No.2: Bill Murray was approached to play the role of Detective John Kimble. Director Ivan Reitman and casting director Michael Chinich auditioned more than 2,000 children for the roles of the students. Exterior scenes at Astoria Elementary School were filmed at John Jacob Astor Elementary School, located at 3550 Franklin Avenue in Astoria, Oregon. Universal Studios hired local artists Judith Niland and Carl Lyle Jenkins to paint murals on the walls at Astoria, and provided new playground equipment, a fenced playground, and a new lawn and hedges around the school. Most of the filming was completed after school was out in June 1990 and allowing many of the students and faculty to be extras in the film. Students' artwork was also used.

Andrew's Blu-ray Review: There are still a few sceptics who laugh at Arnold Schwarzenegger's overwrought muscles, Austrian accent and commitment to the monotone school of acting, but no one laughs at Arnold Schwarzenegger better than Arnold Schwarzenegger himself. As the dense brother who towered over his twin, Danny DeVito, in the hit ‘TWINS,’ and as the mind-altered hero who tossed off tongue-in-cheek remarks in last summer's blockbuster ‘Total Recall,’ and he turned his he-man persona into a shrewd comic advantage. In ‘KINDERGARTEN COP’ and he plays off the Arnold Schwarzenegger image more gleefully and successfully than ever before.

‘KINDERGARTEN COP’ is made up out of parts that shouldn't fit, but somehow they do, making a slick entertainment out of the improbable, the impossible, and Arnold Schwarzenegger. And he plays a Detective John Kimble, who finds himself teaching kindergarten, as part of an undercover effort to locate a little boy and his mother. There is no way that Arnold Schwarzenegger can plausibly teach class, but that doesn't prevent him from finding warm-hearted possibilities in the role and it doesn't get in the way of several big laughs, either.

The film ‘KINDERGARTEN COP’ opens with Detective John   Kimble [Arnold Schwarzenegger] and his cop partner Detective Phoebe O'Hara [Pamela Reed] on the trail of a vicious swine of a drug dealer and mama's boy Cullen Crisp, Sr. [Richard Tyson] played with smarmy conviction and his equally monstrous mother Eleanor Crisp [Carroll Baker] are eager to discover the whereabouts of his ex-wife and their son. So it is Arnold Schwarzenegger's ultimate goal, because he dreams of nailing this creep, and also because he believes that the ex-wife may have $3 million of Cullen Crisp, Sr. drug earnings.

The trail leads to a storybook town in the Pacific Northwest, where Arnold Schwarzenegger and Pamela Reed believe the little boy is attending kindergarten. Pamela Reed used to be a schoolteacher, and so they convince the local school authorities to let her teach the kindergarten class, hoping to pick up clues even though the little boy and his mother have changed their names. Then Pamela Reed gets food poisoning, and it's up to Arnold Schwarzenegger to face the screaming hordes of 5-year-olds.

Detective John Kimble narrows down the list of suspects by   playing a game called: “Who is your daddy?” “What does he do?” The children stand up and say things that are meant to be cute but are usually groaners; the boy obsessed with anatomy is the son of a gynaecologist. No one says, “Daddy is a drug dealer,” but Detective John Kimble narrows the possibilities to a few little boys with fishy stories, and goes on to better games, like a “Police School,” and puts the children through drills that make them look like miniature marines.

Arnold Schwarzenegger says to them in a stern way, “You kids are soft!” he growls. “You're not disciplined!” They march in formation chanting, “Too much homework makes me sick.” Detective John Kimble, of course, turns out to be a wonderful, gentle teacher. Given every chance to mug and go for broad comedy, Arnold Schwarzenegger instead makes Detective John Kimble endearingly vulnerable.

‘KINDERGARTEN COP’ was directed by Ivan Reitman, whose  best work, like `Ghostbusters,' shows an ability to mix the absurd with the dramatic, so we're laughing as the suspense reaches its peak. That happens this time. The scenes involving Arnold Schwarzenegger and the kindergarten kids are the best things in the film, not only because the kids say the most embarrassing things, but also because Arnold Schwarzenegger's strong point here is gentle comedy, often with himself as the foil.

Contrasting with the classroom stuff is a low-key little romance involving Arnold Schwarzenegger and one of the other teachers Joyce Palmieri [Penelope Ann Miller], and a parallel story involving the vicious drug dealer and his mom, and a journey to the small town for the obligatory, but quite effective, violent climax. Ivan Reitman juggles the light stuff, the heart-warming scenes, the comedy and the violence with endless invention, so that the film doesn't seem to be shifting gears even when it is.

Films of this calibre are often no stronger than their villains, and Richard Tyson and Carroll Baker make a very scary and effective team, because he's a spoiled-rotten mother's pet who has never grown up, and whose love for his son is basically narcissistic. She is a nasty piece of work on wheels. The other key performances are also effective, and it was interesting to observe, especially while seeing the film with a large audience, what genuine affection the public has for Arnold Schwarzenegger. He has a way of turning situations to his advantage, and creates an entertaining relationship with his young students in this film.

Unfortunately, the story takes a sharp right turn at the end, veering into violent action that makes ‘KINDERGARTEN COP’ unsafe for young children. Imagine taking a small child to a film in which a stranger arrives and holds a gun to his own son's head, and in which the boy watches his teacher, his father and his grandmother shoot it out in the boys' lavatory. The shoot-'em-up finale is another one of those Arnold Schwarzenegger staple film diet, but it is a jarring wrong note in this otherwise very congenial fun film.

Warning: This is not a film appropriate for smaller children. Despite the film title and the ad campaign at the time of its release, which inferred that it looked like a sweet and jolly fun film, the film contains images sure to be terrifying to young person of a certain age who attends kindergarten or pre-schoolers, such as a man setting the school on fire, small children kidnapped and terrorised, a father slapping his child, and so forth. In context and for mature viewers, the scenes have a purpose and the film works. But it'll be nightmare time for smaller children who view it, so please parents, be vigilant and also be very responsible.

Blu-ray Image Quality – Universal Pictures catalogue titles are hit and miss when it comes to how they appear on Blu-ray. Given that the disc is rather featureless, I don't think a whole lot of effort went into this transfer. Certainly the 1.85:1 aspect ratio and the 1080p image presentation is not bad by any means, but it doesn't quite really hold a candle to more modern Blu-Ray releases. Colours are bold and bright, there seems to be a fine layer of grain in some of the darker sequences, but detail has been slightly improved since the inferior DVD release and though no significant Digital Noise Reduction has been used, the overall image quality is fairly above average. Contrast and black levels work well off one another, but early on I caught bit of motion in some shadows. Despite this, it is still a good Blu-ray release.

Blu-ray Audio Quality – Unlike some of Arnold Schwarzenegger's action films, this 2.0 DTS-HD Master Audio option won't be one that will test the limits of your speakers. This is an upgrade over the previous Dolby mix found on the inferior DVD release, but nothing that really warrants too much attention. Vocals are strong and I detected no signs of distortion, but there's just not a lot of range or depth. The front stage handles most of the action nicely, but this mix is fairly dialogue-driven with only sporadic action at the beginning and end.

Theatrical Trailer [1990] [480i] [1.37:1] [2:22] This is the original Theatrical Trailer for the film ‘KINDERGARTEN COP.’ Sadly this is of very poor quality and looks like it was only broadcast as an American TV advert.

Finally, ‘KINDERGARTEN COP’ is nothing less than great entertainment. It captures the very essence of the simple, feel-good story, here blended together with a bit of action and an edge that works surprising well against the comedy; nearly as well as the juxtaposition that is “bodybuilder teaches kindergarten.” It's great fun, one of the most quotable films of the 1990s, and holds up incredibly well almost a quarter-century after its release (oh, my, how time really does fly...). Sadly, Universal Pictures Blu-ray release of ‘KINDERGARTEN COP’ is sadly lacking in plenty of extras, and   image and sound are sort of reasonable. Still, the release comes recommended on the strength of the film, but still despite it being just an ordinary Blu-ray disc, I still like this film anyway and now I have another Arnold Schwarzenegger film added to my Blu-ray Collections. Highly Recommended! 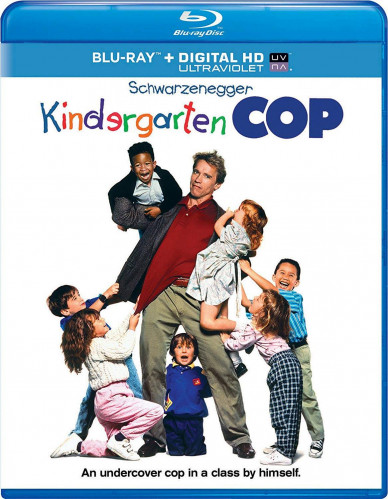 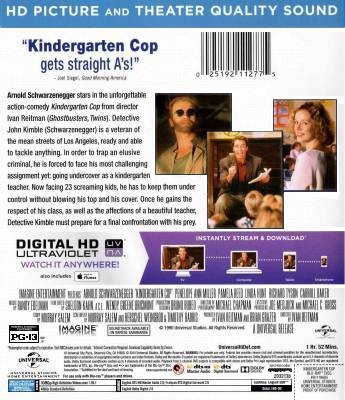