Sir Michael Caine and Cybil Sheperd star in this witty and intriguing story of crosses, double crosses, wheeler-dealing comedy set in the world of high finance. A Las Vegas money expert is sent by the mafia to supervise the running of a Swiss bank bought to launder their profits. But arriving in Lugano, Doc Fletcher [Sir Michael Caine] discovers Prince Gianfranco di Siracusa [Louis Jourdan] has misappropriated the bank purchase money to embark on a disastrous scheme to make a killing on the international silver market. Adventure and romance on a grand scale in which everybody eventually wins – or nearly everybody!

FILM FACT: $ILVER BEAR$ is a 1978 British comedy thriller film that is based on a novel by Paul Erdman.

Andrew’s DVD Review: ‘$ILVER BEAR$’ [1978] Mafia finance wizard Doc Fletcher [Sir Michael Caine] is sent from Las Vegas to supervise a Swiss bank handling stolen money in the hope of making a killing – but is horrified to discover an associate has already  spent the loot, landing the pair in hot water with their vengeful bosses.

Sir Michael Caine has made some odd choices in his career, but none as peculiar as this high-finance drama in which he sets up a bank in Switzerland for gangster Martin Balsam as Joe Fiore and gets mixed up in a scam involving an Iranian silver mine.

In London, the world’s richest man, Charles Cook [Charles Gray], is worried when silver from the Firdausi mine depresses the market and wants Donald Luckman and Henry Foreman to buy the Lugano bank for $60 million. Charles Cook will then buy the silver mine from the Americans for $60 million, leaving them with a European bank acquired for nothing. Doc Fletcher then seduces Donald Luckman’s ditzy wife Debbie Luckman [Cybill Shepherd] to find out what is really going on. Joe Fiore wants to sell the bank, but gives Doc Fletcher a week to organise a management buyout. Doc Fletcher tries to foreclose on the mine but discovers it does not exist. Agha Firdausi and Shireen Firdausi are smugglers, recycling silver trinkets from India into ingots. Doc Fletcher engineers a complex deal that leaves him with ownership of the bank, no-one out of pocket and only one person going to jail, pour unfortunate gullible Donald Luckman. Debbie Luckman moves in with Doc Fletcher while her husband Donald Luckman serves his prison sentence writing a book about his experiences.

In terms of its humour, the film actually recalls another fine comedy about money, 1993's ‘Barbarians at the Gate.’ As in that film, the enjoyment of the ‘$ILVER BEAR$’ comes not from the “shtick” [a gimmick, comic routine, style of performance, etc. associated with a particular person] but from the cunning of the lead characters and the dynamic ways in which they out-wangle each other. Also to the credit of Peter Stone's script: the complex fiscal machinations of the plot, which could easily become indecipherable in lesser hands and stay just clear-cut enough to satisfy; we may have a few questions at the end, but can easily ascertain the basic twists of the story.

Paul Erdman’s novel, “The Silver Bears,” was a financial thriller set during the early 1970s collapse of silver prices. First published in 1974, the film rights were snapped up and screenwriter Peter Stone commissioned to turn the book into a comedy. Stone had achieved great success with his work on several Cary Grant films including ‘Charade’ [1963]. Director Ivan Passer was brought on board to helm the project.

In his 1992 autobiography, Sir Michael Caine recalled how he came to be cast as lead in ‘$ILVER BEAR$’ and was planning to shift from England to Los Angeles but his accountant said Sir Michael Caine was virtually penniless, thanks to Britain’s punitive taxes on high earners, so panicking, he accepted the first offer of work that came along, to make a picture called ‘$ILVER BEAR$.’ The picture reunited him with Joss Ackland, who worked on ‘The Black Windmill’ [1974]. Making his film debut in ‘$ILVER BEAR$’ was young comedian Jay Leno, who later became famous as a TV host on “The Tonight Show” in the USA.

The picture was shot in the final months of 1976, with locations in Switzerland, Morocco and England, and studio work at Twickenham. Sir Michael Caine was interviewed in Lugano by London’s Evening Standard newspaper. Sir Michael Caine had a ready explanation when told he looked lean and fit: “We were on location in Morocco. I had my usual cold and dysentery and lost 11 pounds.” Despite what he later wrote in his autobiography, in the 1976 interview Caine denied rumours about going into tax exile. “You know, I took my decision and I’ll pay my taxes and stay in England.”

DVD Image Quality – NAT COHEN EMI Films, STUDIOCANAL and Optimum Home Entertainment presents us the film ‘$ILVER BEAR$’ with a totally stunning 1080p image and greatly enhanced 2.35:1 (CinemaScope) aspect and it is one of the best DVD presentation ever, you would think it was a Blu-ray disc and really shows off the glamorous locations really well. Anthony Barry Richmond pulls out the stops and makes the Technicolor image standout with total perfection. The contrast is punchy, and while the strong colours all round, especially with the mid-range colours is most attractively rendered. There's not a dust spot to be seen and the image is rock solid in the amazing 2.35:1 frame, and the detail is still crisper with this very high quality DVD released in 2007 and put this DVD on and see if your guests can tell the difference. So all in all, this definitely get a much deserved five star rating for a film released in 1978. Please Note: Playback PAL: This will not play on most Blu-ray and DVD players sold in North America, Central America, South America, Japan, North Korea, South Korea, Taiwan, Hong Kong and Southeast Asia. Learn more about Blu-ray region specifications.

DVD Audio Quality – NAT COHEN EMI Films, STUDIOCANAL and Optimum Home Entertainment brings us the film ‘$ILVER BEAR$’ with just one standard 2.0 Dolby Digital Stereo Audio experience. The audio is nicely rounded and also gives us a good dynamic range and is also very clear, and a well-modulated sound with no distortion or age-related surface noise, pops, or crackles and the dialogue from the actors is very clear and precise and especially you can hear all the actors speaking without any hindrances and definitely no distortion. Also outstanding is Claude Bolling’s robust and dramatic comedy film music score that really adds ambience to the film that really helps you to enjoy this audio experience of this excellent tongue in cheek comedy film even more, so well done NAT COHEN EMI Films, STUDIOCANAL and Optimum Home Entertainment to really gives the soundtrack a five star performance.

DVD Special Features and Extras: Sadly there was none provided, which is such a same as I am sure somewhere in the NAT COHEN EMI Films vaults they must have had interview with the cast and crew and especially deleted scenes.

Finally, the primary draw of the film ‘$ILVER BEAR$’ is the eclectic cast. In addition to Sir Michael Caine, Martin Balsam and Jourdan, there's Cybill Shepherd, David Warner, and — wait for it — Tom Smothers and Jay Leno and all the characters do their credible jobs and parts really well. This is a very engaging, light-hearted look at the complex inner-workings of financial institutions and markets and how a group of con-men try to exploit it. The characters are charming and delightful. Sir Michael Caine is totally superb as always playing a man who would like to be a lot more ruthless and intimidating if he weren’t surrounded by a bunch of incompetents. Louis Jourdan is suave as the Prince Gianfranco di Siracusa and the two leads share very contrasting personalities and styles, which makes their conversations and budding friendship very interesting.

For those looking for a diverting, original comedy that emphasizes the subtle and dry humorous exchanges between business partners, then this little known gem should hit the spot so very well. Highly Recommended! 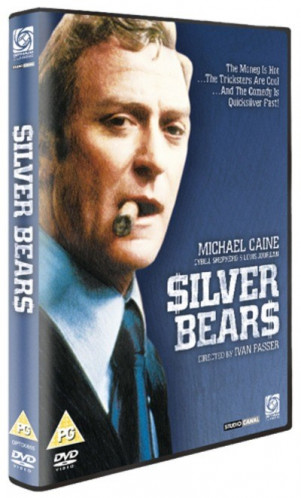 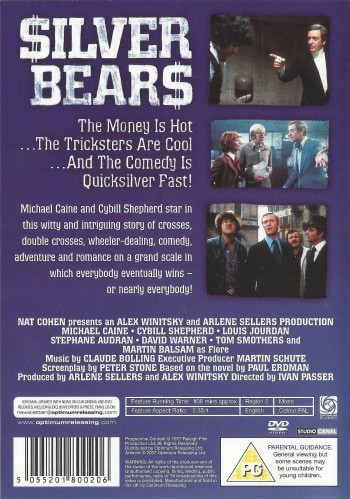